The Snapper by Roddy Doyle 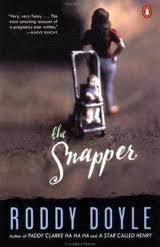 I was very happy when one of my Christmas presents was The Barrytown Trilogy by Roddy Doyle.  So far I have read six novels by Dolye including the first book in the trilogy, The Commitments.  I really like his work, obviously, and it gives me a real, I hope, feel for Ireland and the rhythms of Hiberno-English.

The Barrytown Trilogy novels deal with the lives of the members of a working class family in north Dublin, the Rabittes.  The first novel centered around the oldest son's attempt to start a band.  This one deals with the consequences for the family of the unwed pregnancy of the oldest daughter Sharon, age 20.  I am such an outsider to Irish culture that I needed Google to learn that in Irish slang, a "snapper" is what a baby is called, as in "Who is the father of that snapper you are carrying?" 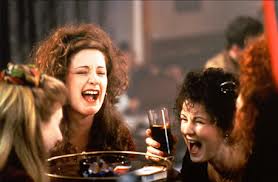 The novel is told largely though conversations.  There are  three interrelated groups in The Snapper.  The first one is the Rabbitte family, father and mother, Jimmy Jr and younger children.   Of course it is a very emotional moment when Sharon tells her parents she is pregnant, made worse by her refusing to name the father.  We also have, and this was a joy to read, Sharon and her girl friends.  They go wild when they learn she is pregnant.  When she will not tell them who the father is they come up with all sorts of possibilities.  Then there are the pub friends of Jimmy Senior.  He is a little embarrassed his daughter is pregnant but he gets is a bad fight defending her.

We, though nobody else really does, learn who the father is, and is pretty shocking.   How Sharon tries to hide the father's identity is hilarious.

The ending of the novel was very warm and touching.

I really liked this novel an awful lot.  I have already started the last novel in the trilogy, The Van.