"The Dredgeman's Revelation" by Karen Russell 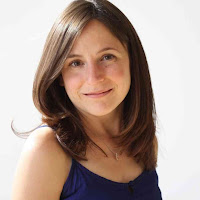 This is my first short story by Karen Russell.  (1981, Miami, Florida, USA)She is the author of a short story collection St. Lucy's Home for Girls Raised by Wolves (I have not read it but I love the title) while her second book was a novel Swamplandia set in an amusement park in the swamps of the Florida Everglades.   She has won numerous awards.   I know she has a new collection book of short stories being published today, Vampires in the Lemon Grove:  Stories which I predict will get a lot of attention form those in the book blog world who love short stories, as I do.   I was looking through one of the short story anthologies I am in possession of, Twenty Under Forty:   Stories from the New Yorker and I was happy to find a story by Russell included.   The anthology is a collection short stories by authors under forty that the editor, Deborah Treisman feels show great promise.  Treisman has been a fiction editor for The New Yorker for 15 years so she is in a position of significant influence in the contemporary short story world.    The New Yorker has done more to advance the art of the short story than any other publication in at least the last 100 years and maybe ever.   It helped lots of Irish short story writers.   Some say it has also shaped the modern short story as people write works hoping their top paying editors will like.

"The Dredgeman's Revelation" is set in the Florida Everglades in the early 1930s.   The United States was in the grips of a terrible depression, much worse than the economic issues it has suffered in the last decade.  The story opens with the birth of Louis Thanksgiving in a New York City charity hospital.    His unwed mother whose name the hospital did not know named him Louis after his mother died.   He was sent to a foundlings home.   Along with other babies he was advertised as up for adoption and they were then put on a train to the middle west of the USA where he was adopted by a farmer who used him as a slave.  He ran away at 16.   The skipped around the country looking for work and he ended up in south Florida.  He got a job working on a crew that was draining parts of the Everglades for development.  Conditions were terrible, food was horrible and the work was dangerous but Louis did not mind as he had never known anything better.  The men on the crew were the closest to friends or family he ever had.

Russell does a very good job of letting us see what life was like for the Dredgemen, as the workers were called.  Florida in the early 1930s was not  Miami Glitz and Disney world.  It was a very different world than most think of now and I really liked how Russell this story helps us understand just how hard life was for the people in those times.


"Florida, in those days, was a very odd place: a peninsula where the sky itself rode overland like a blue locomotive, clouds chuffing across marshes; where orange trees and orderly rows of vegetables gave way to deep woods and then, farther south, broke into an endless acreage of ten-foot grass. This, finally, was the vision that reached Louis through the boxcar door: a prairie that looked as vast as the African savanna."

Am amazing surreal event takes place at the end of the story.    It involves elements of Magic Realism and it is really powerful.

I enjoyed this story and will await curiously to see how her new collection is received.