The Diary Of Samuel Pepys -A New Reading Life Project 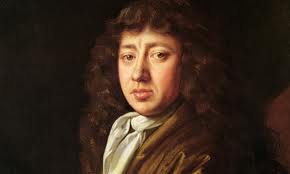 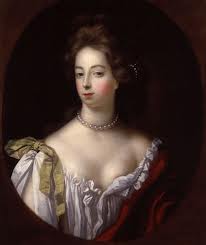 About fifteen years ago I read the  complete University of California edition of the Diary of Samuel Pepys. I consider this one of the great reading experiences of my life. I found the collection at an extreme bargain price in a used book store and I still treasure it.  Normally I do not get sentimental over physical books but I really enjoy seeing the beautiful University of California edition on my shelves.  There is a  stamp in the first volume saying it is book number 6,721 in the Library of R. A. Peterson.    I wonder how the collection ended up being sold so cheaply.  One has to guess that R. A. Peterson passed and his or her heirs did not value the set.   Each volume bears the book count stamp and the bold signature of R. A. Peterson.   I will say to her or him, I am taking good care of your books and I love them also.

Samuel Pepys (1633 to 1703) lived through some of the most tumultuous times in English history.  He was there when the plague ravaged London and he records vividly his experiences of the great fire of London.  During the period of the diary he was clerk to the  to the Royal Navy board.   He was very good at this job and he also had access to all sorts of patronage which he took advantage of at every opportunity.  He married his beautiful wife when she was fifteen (normal at the time), he loved her dearly throughout their childless marriage but he pursued other women with great ardor.   Many were the wives and daughters of men who needed his help with Naval matters and he got in big trouble when his wife found out about his dalliance with a maid.   He also loved to read and was an avid collector of books.    The events in his diary are as interesting as those in any fiction.  For sometime I have wanted to read the diary for a second time.  .  The first time I read it I skipped most of  the copious notes as I had less time to read then  but they are tremendously edifying and this time I will read them all.   There is no better way to get an inside look at Restoration London than in these diaries. 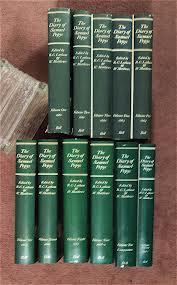 Parts of his diary was written in a code, only partially cracked is my understanding, he used this to describe many of the sexual encounters with women, including his wife.  They are  in the diary  but it is in fact not quite clear what Pepys did with these women.  He was not, unlike the other great English language diarist, James Boswell, an employer of prostitutes, he was more a sexual predator using his connections to bully women into some sort of sex.

Shortly after reading the diary I went to London and one of the places I visited was the Samuel Pepys Museum.   I had a long talk with the curator, I think he was shocked I had read the diary, and got to see a lot of the artifacts of the period.

I have decided if I am to read the diary one more time I might as well start now.   I will post on what strikes me, maybe a lot maybe just a bit.   Pepys loves to read and left a wonderful 3000 volume library you can see at Cambridge.  I recall he often talks of the books he bought.   If you want to learn about English history in the 17th century, this diary is a true treasure.   It is also fun to read, there is marital drama.   There is high drama also, political and domestic.  The sections where he is trying to get back in his wife's good graces after she finds out about him and a maid are totally exciting and as good any fiction.   Married will cringe over this section!  Pepys was very much a man about the town and off the world.  Pepys was not close to a morally perfect man but he was as smart as they come and amazing perceptive.

I have started volume one and in the first entry he buys a dozen bottles of port, goes to church and visits his faher in the company of his wife and records some office politics.