"The Lottery" by Shirley Jackson (first published June 26, 1948 in The New Yorker) 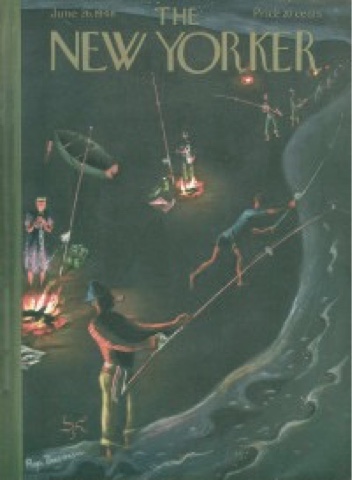 My Post on Shirley Jsckson A Rather Haunted Life by Ruth Franklin
Shirley Jackson's Best Know Works are the novels The House on Haunted Hill, We Have Always Lived in the Castle, and her famous short story, "The Lottery".
She was born in San Francisco in 1916 and died in North Bennington, Vermont in 1965
She was married to Stanley Edgar Hyman, a well know literary critic and cultural historian, from 1940 to 1965.  They had four children. 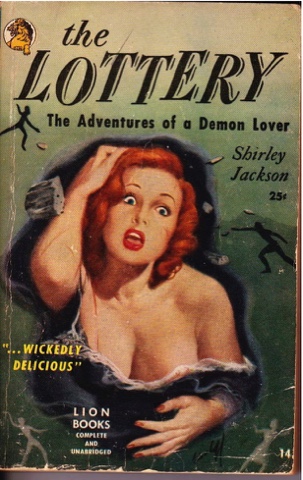 "The Lottery" is the most famous work of Shirley Jsckson.  After initial publication in The New Yorker June 26, 1948 more letters were received about it by any other story in the history of the magazine.   Everyone  wanted to know what the story meant and nearly seventy years later that was my reaction after reading this amazing, seemingly simple story.  It is one of the most anthlozied American short stories.
The story has a Hawthorne like feel.  I don't want to at all spoil the story for first time readers.  The story can be seen in a multitude of fashions as a commentary on religious beliefs, plotical structures and societies.
This a great story, deeply intriguing.
I am glad I have at last read "The Lottery".
I learned in Ruth Franklin's very good biography of Jackson that she got to almost hate the story from so many people demanding she explain the meaning behind the work.
Please share with us your reaction to "The Lottery".
Mel u

"The Lottery," one of the most frequently anthologized American short stories, almost always fascinates readers. Each time I read it, I have a slightly different POV about what aspect of culture/society that Jackson is critiquing. My current POV involves her condemnation of conformity v. individualism and group-think v. independent/critical thinking. Given my interest in God and American writers -- theme of my blog -- I am also struck by the nearly complete absence of religion in Jackson's story; however, I think I need to reread it (i.e., it's been a few years since my last encounter) and reassess that observation. Thank you for your posting. You're sending me back to the story again. v/r George

I, too, find "The Lottery" a fascinating story, one that can be read from many perspectives. Below is a link to my post on the story.

Thanks for stopping by. I'm glad you found it interesting. It's a great short story.

"The Lottery" is a story that, for me, explores the dangers in irrationally following a tradition well beyond the point when all of the accoutrements of that tradition are treated with care and respect. In "The Lottery" there is the sense that the current society does things "like things have always been done," even when they no longer remember so much why and the toll is death. I remember feeling horrified as I read it the first time because there is a sense of systematized cruelty without reason..."and then they were upon her," which is a dangerous state to live in, and the story also dramatized the terror of enacting such a thing, the brutal upped flight or fight impulses, and human weakness of spirit. I think it rocked the country because it only exaggerated the violent tendencies of America but brought it home by Jackson's chosen cast list. The characters we'd think of as safe, not safe, felt an indictment to invisible assumed privilege as well.