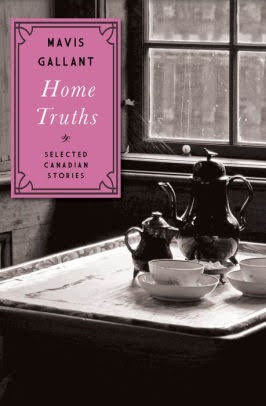 Jorinda and Jorindel - A Short Story by Mavis Gallant - first  published September 19, 1959 in The New Yorker

Jorinda and Jorindel - a Grimm's fairy tale, first published by the Grimm Bothers in 1812.  (The animated podcast linked to above is very enjoyable, no translator or reader credit is given.)

September 1, 1951, publishes her first short story (In The New Yorker)

I have been reading short stories by Mavis Gallant since 2013.  I was delighted when a blogger I have happily followed for years, Buried in Print, announced they would be reading and posting on her many short stories (116 published in The New Yorker alone) on a weekly basis.   I am following along as I can.

Recently I was delighted to find a collection of sixteen of sixteen mostly set in Canada short stories by Gallant,Home Truths for sale in Kindle format for $1.95. it is now back up to $9.95.  Buried in Print has just reached these stories so I will be reading along on all these works. Today's story is reprinted in that collection.

Just as was the prior featured story, "Thank You for the Lovely Tea", "Jorinda and Jorindel" is set in Canada in the 1930s.  In both stories we see a contrasting of Americans and Canadians.  In this story an American, Mrs Queen lives in Canada and worked as a servant for a wealthy woman.  It seems almost she was dumped  in Canada when her employer moved to California.  Here are her private thoughts:

"Mrs. Queen came out to Canada with Lady Partridge. The wages were low, and she had no stomach for travel, but she was devoted to Lady P. and to Ty-Ty and Buffy, the two cairns. The cairns died, because of the change of air, and after Lady P. had buried them, she went out to her daughter in California, leaving Mrs. Queen to look after the graves. But Mrs. Queen has never taken to Canada. She can’t get used to it. She cannot get used to a place where the railway engines are that size and make that kind of noise, and where the working people are as tall as anyone else."

As I read this story the first time I thought it felt different from most other Gallant stories, it had a strange almost fey feel, like a fairy tale.  The characters are seeming  archetypes.  There is a lot in this story, an American lady escaping prohibition, a titled lady, her move  to California after her dogs are left buried in Canada begs for symbolic ramblings but above all there are children, especially a boy who lives ten months of the year in an orphanage spending two warm months working on his uncle's farm. (Shades of a cross gender myth of Orpheus?) and his female cousin, they are about eight.

I acknowledge when I read this the first time I did not know that Jorinda and Jorindel was a Grimm's fairy tale.  After watching the video of the story, on my second reading I a was trying to see how the stories are related.  In the Grimm Fairy tale, an evil old fairy woman turns beautiful young women into Nightingales and cages them.  She has captured the love of a young man's life.  The story turns on how he gets her released, the fate of the fairy and the sevenhundred women she had turned into Nightingales.

In a way, everyone in the story is captured, some by convention and family, some by poverty, some wealth.  I wonder is the orphan boy a captured Nightingale waiting to be saved?  There is a lot, as there is in all her stories, to think about here.

I'm going to be thinking about this story for a long time, I think. It must have been one of the first of MG's stories that I read (because Home Truths was the first collection I read from cover to cover, not just a single story in an anthology of Canadian story writers) but somehow I have no memory of it, which I now figure must be because I couldn't figure out what was going on, not even slightly! Heheh But she is such a thoughtful and deliberate writer, so I really do want to figure it out, and feel as though I'll be looking for clues for years to come!

So glad you are enjoying these stories: it's a pleasure to have company while reading through them!

(It puzzled me a little, what exactly happened to the dogs. How could the air be THAT different?!)