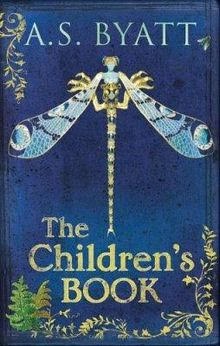 The Children’s Book by A. S. Byatt

The Children’s Book is a long, complex challenging book.  I loved it.  It deals with the interrelated lives of several English families from late Victirian times up through World War One.  (It for sure brought back very fond memories of a long afternoon in The Victoria and Albert Museum, then known as The South Kensington Museum.)

As you would expect, all the major literary review sources did features on The Children’s Book.  Everyone of course praised it but all found something negative to say.  (This seems almost required in press reviews.). I will just make a few random Observations about some of my favourite aspects of the book.

The center of the book is the large Family of a well known writer of children’s stories, Olivia Wellwood. some say she is loosely based upon Edith Nesbit.  She is from a very artistic family involved with progressive causes such as seeking the right to vote for women.  She writes stories for each of six children (several are i included and they are all a lot of fun, late Victorian gothic).  We follow the Development of the children up to the end of WW One.  There are also other families.  We discover dark secrets.  There is even a German family and a trip to prewar Berlin.  We are reminded the European monarchs are  all cousins. The family knows J. M.Barrie and a night watching Peter Pan on the London stage is a central element.  The World War One Poet Rupert Brooke is a close friend of one of the characters and Oscar Wilde shows up at a huge international fair in Paris.  The children discovering their direction in life and their sexuality is very well shown.  We see the hypocrisy in the class snobbish attitudes of the Fabian society members, touting social equality while enjoying a very privileged existence.
.

Byatt helped me grasp the impact of history on the characters in chapters devoted to current events, mostly in The UK.  We know terrible events are coming.  We kind of have a feel for a Society run by the people in Saki’s stories, way out of their depth.

One of the very interesting characters is a young man, Philip, who is found as a runaway hiding in the museum.  The Wellwood family takes him in.  He goes on to become an apprentice to a famous potter.  Through him and his sister we do get a window on the poorest of the people of the UK.  I enjoyed seeing Philip and his sister develop.

The denouement of the book is in the carnage experienced by the children,now grown,  in the fields of France.  We also see how this impacts the women.  I admired the struggle of Dorothy to become a surgeon.

There are enough characters in The Children’s Book for a huge Victorian novel.
There is a great deal to learn about UK society in the book.

The Children’s Book requires a commitment of time and attention on readers. Those willing to give the book what it deserves will be very happy to have encountered it.

In 2013 I read and posted on her Booker Prize Winning Possession. Prior to blogging I read The Biographer’s Tale.

I hope next to read The Virgin in The Garden.

Email ThisBlogThis!Share to TwitterShare to FacebookShare to Pinterest
Labels: A S Byatt, UK

This one I had out from the library several years ago, but I never got around to it. I remember being tickled pink at the idea that someone had, mistakenly, put a "Children's" sticker on the spine (where they would put a magnifying glass for a mystery, or a planet for sci-fi, etc.) and wondering how that happened (girth alone)! I've read the Frederica Quartet, which you're heading for next, and I remember quite liking it at the time. Now, I'm not sure how I had the stamina, as The Children's Book might be just as long but much more about story, it seems! I hope you enjoy it.