Growth of Jewish Population of Montreal

The Montreal Shtetl- Making Home After the Holocaust by Zelda Abramson and John Lynch is a groundbreaking essential work, both for content and methodology.  It is a study of the immigration of Eastern European Jews into Montreal and their integration into Canadian society, after the Holocaust.  Most arrived with very little money, normally speaking Yiddish, Hungarian or Russia but little English.  Unlike early waves of immigration in which a man would come first, establish himself and then bring over his family, post Holocaust immigrants often came as families.  The Montreal Shtetl- Making Home After the Holocaust focuses on immigration from 1947 to 1954.

Immigrants first priorities were a place to live and a job.  The lucky ones had family or contact already in Canada to help them.  The other were helped by various government and private organizations.  The authors go into detail about Canadian immigration laws of the period.  Workers were especially needed in the garment trade and those with skills in this area found work right away, mostly initially as paid by pieces completed factory workers.  There was no day care so where there were children normally the wife stayed home.  It was normal for men to bring work home, often to be helped by his wife.  The immigrants were very hard working, very family oriented and wanted very much  be a success. (Ten years after arriving success meant owning a house in a decent area, kids in good schools, food anxiety long gone, often owning a business or being in managerial positions.)

Just like in Israel, Holocaust survivors were often viewed by Canadian English speaking Jews as suspect.  It was wondered how they survived.  The authors show how new arrivals, mostly Hungarian Jews, sometimes also but not always speaking Yiddish, stuck together.  In part this was because Holocaust survivors could often only closely bond with other survivors.  Third generation Canadian Jew looked down on new arrivals as ignorant and though they helped them they were not warmly welcomed.  Many immigrants were in fact highly educated, having had professional positions and wealth before they lost it all.  It was sad to learn that an immigrant with a degree in engineering would find his first Canadian landlord explaining what a light switch was for.  There were lots of quick marriages in the immigrant community. Many had lost their spouses in the Holocaust.  Education of children, who quickly became translators for their family, was a very top priority.  It was interesting to see that parents might speak Hungarian or Yiddish to each other and friends but insisted their children speak only “The King’s English”.

The heart of The Montreal Shtetl- Making Home After the Holocaust is in the numerous fascinating interviews with the immigrants.  The authors explain the methodology behind the interviews.  Most interviewed were seventy plus.
The interviews are in three sections.  The first section is devoted to experiences before they arrived and how the arranged passage to Canada.  There were set quotas as to how many Jews could be admitted.  Canada was more liberal than the USA at the time.  Many immigrants applied to the USA, Canada, Australia and South Africa, just wanting to put Europe way behind them.

Section two of the interviews deals with settling in Canada.  The authors studied the records of Jewish Social Agencies of the period.  Immigrants got some cash aid, help with rent and counseling.  Some at once found housing and a job, others struggled.

The last section of interviews takes us on into their full integration into Canadian society, their children were professionals and their grandchildren in medical or law school.  Most, but not all of course, did very well.  We follow them from rooming houses to nice houses in exclusive areas.  Most immigrants did socialize mostly with other immigrants and we do see there was a lingering anti immigrant feeling, nearly as bad among prior immigrants as English or French speakers.

The Montreal Shtetl- Making Home After the Holocaust by Zelda Abramson and John Lynch should be read by anyone interested in immigration, Canadian history or post Holocaust Jewish experiences.  This is a wonderful book. I liked everything about it! The interviews were a joy to read.

In conjunction with this book, I suggest reading World of Our Fathers: The Journey of the East European Jews to America and the Life They Found and Made by Irving Howe.

I highly recommend everyone visit the website of Between the Lines Books, a forty year old Montreal based publishing company.

“Between the Lines books presents new ideas and challenge readers to rethink the world around them. Our authors offer analysis of historical events and contemporary issues not often found in the mainstream. We specialize in informative, non-fiction books on politics and public policy, social issues, Canadian and world history, international development, gender and sexuality, critical race issues, culture, adult and popular education, labour and work, environment, technology, and media.” - from the publisher

Zelda Abramson is an associate professor of sociology at Acadia University. Her areas of teaching and research include methodology, health, and family. As a public sociologist, she strives to combine academic research with social activism. Zelda grew up in Montreal as a child of Holocaust survivors.

I was initially drawn to this book through my admiration for Chava Rosenfarb, whose image is in my blog side bar.  After spending four years in Auschwitz and then Bergen-Belsen, five years waiting for a Canadian visa in Paris, she and her husband,also a survivor, moved to Montreal.  Already a renown author, she was met with a reception by Yiddish writers.  She wrote stories related to Holocaust survivors in Montreal as well as many other great works.  The Montreal Shtetl- Making Home After the Holocaust by Zelda Abramson and John Lynch helped me understand her works more.

I salute Between the Pages for publishing The Montreal Shtetl- Making Home After the Holocaust by Zelda Abramson and John Lynch and give my great thanks to the authors. 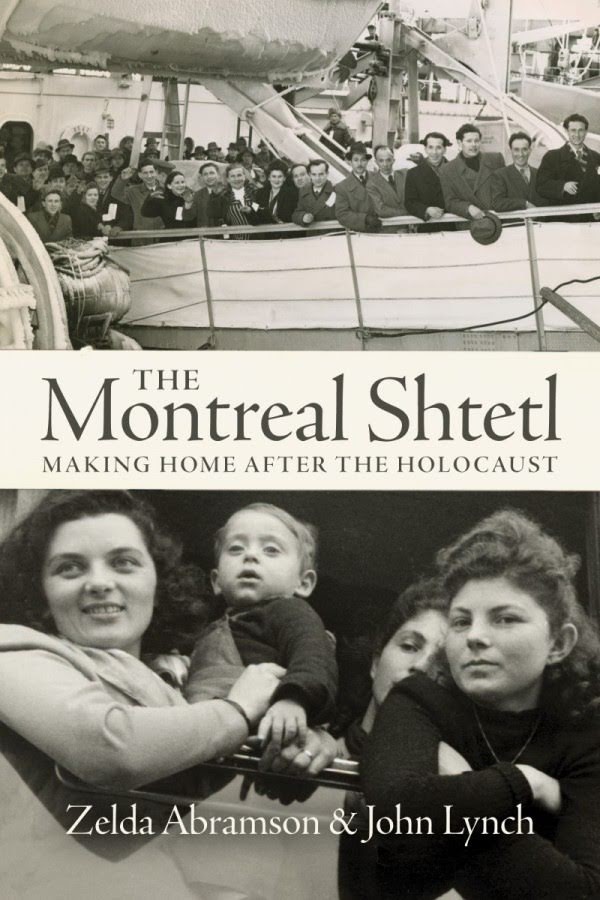 This sounds like essential reading for sure: thanks for bringing it to the attention of readers around the world. And what a curious cover photo: so many different and striking facial expressions in that small group!

Buried in Print. This is, to me, pretty close to essential reading for anyone into post Holocaust history and or immigration into Canada. Overall Canada conducted itself in a more honorable way than the USA