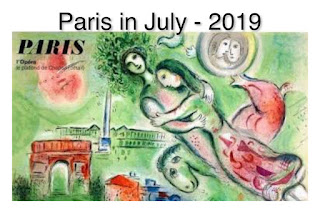 This will be my tenth year as a participant in Paris in July, hosted by Thyme for Tea.  Paris in July is a wonderful international event devoted to all things Paris.

The very simple rules are on the sign up page.

Blume Lempel left the Ukraine for Paris to escape anti-Semitic pograms.  She loved Paris but did leave for Canada, settling in New York City shortly before World War Two began.  She loved Paris and always wanted to return but never did.  I was delighted to find four short stories, translated from Yiddish, by Lempel set in Paris.  Of course I could not neglect Colette.  Taste of Paris:A History of the Parisian Love Affair with Food by David Downie left me hungry.
THE ARCHIVE THIEF The Man Who Salvaged French Jewish History in the Wake of the Holocaust by LISA MOSES LEFF is a very valuable addition to Holocaust Literature.  Lost Times - Lectures on Proust in a Soviet Prison Camp by Józef Czafski -translated and introduced. by Eric Karpeles left me humbled. Gerorge Sand by Martine Reid was edifying.  The Beggar” by Gaito Gazdanov, is a story by a Russian Cab driver in Paris, writing stories of his experiences.  He deserves to be better read.

Participates can share their experiences on anything from your favorite Paris restaurant, a movie about Paris, my pick is Ninotchka, a French artist, a trip to Paris or a fashion designer.  Paris history is also a rich topic.

Literary stars such as Balzac, Zola, Proust, Flaubert, Hugo, Colette, de Maupassant are must reads.  Plus of course there are great set in Paris works by Americans, the best of which, in my opinion, is The Ambassadors by Henry James.  Hemingway's The Movable Feast would be a very good pick.

Getting an early start, I have begun several of my choices.  I probably won't finish them all and hope to learn about new to me works from other participants.

I will be assisted by Ambrosia Bousweau

Email ThisBlogThis!Share to TwitterShare to FacebookShare to Pinterest
Labels: Paris in July2019

Happy to see you there. Very ambitious reading as always. I have not really decided yet. Since I am on holiday half the month, it has to be on a little bit of ad hoc basis.

Mel U, here we go. I've just posted the first week's Mr linky for Paris in July. You're going to be teaching so much more about Paris of a past era this month. Thank you for being such a dedicated reviewed, with a real interest in the history.