Wandering Stars by Sholem Aleichman - 1909 - translated from Yiddish. by Aliza Shevrin -2006 -with a preface by Tony Kushner 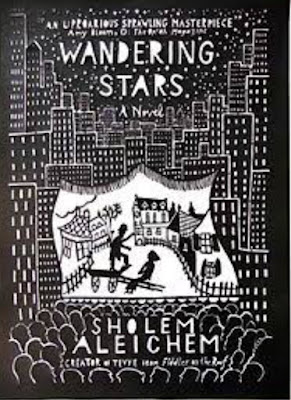 TONY KUSHNER in the preface

1859 Born in The Ukraine, then part of the Russian Empire

To most people, certainly me a few years ago, Yiddish writers were divided into two categories, Sholom Aleichem and a bunch of authors I have never heard about who I would never have read were it not for Yale University Press giving me a full set of The Yale Yiddish Library.  These ten volumes, introduced by top authorities in Yiddish Studies, include some of the great classics.
Among the works were two totally marvelous novels  by Sholom Aleichem.  All of the works were pre-Holocaust, written in Eastern Europe and Russia.  All were by men.  As Yiddish speakers left Europe, mostly to NYC then Toronto and Montréal women writers like Blume Lempel and Chava Rosenfarb began publishing in Yiddish.  I have talked a bit about the history of Yiddish Literature (running from around 1875 to maybe 2004 with the passing of the last of the emigrated writers) in prior posts.) My perception is most seriously into Yiddish Literature, a huge treasure trove of Short Stories, are “heritage readers” seeking ties with the world of their ancestors in Eastern Europe.  Behind it is also a powerful message to those who would destroy Jewish Culture, you lose, we win.  I read in this area because it is an incredibly wonderful literature.  The stories range from heart breaking to funnier than a Mel Brooks movie.  Yiddish scholarship has very strong support and thanks to the internet, and maybe especially The Yiddish Book Center, interest is increasing.

I think my favorite work of Yiddish literature is the deeply hilarious profoundly revealing The Letters of Menakhem-Mendl and Sheyne-Sheyndl by Sholem Aleichem, on whose work the movie The Fiddler on the Roof is based.  Sholem Aleichman is an artist of the highest order.  He is a world class cultural treasure.

Wandering Stars revolves around two Yiddish theater preformers.  They are young, maybe 16 when we first meet them. The boy is from a rich family, the girl  is the daughter of the shtetl cantor.  A Yiddish theater company is in town.  Both are fascinsted by the theater.  They fall in love, join the theater and run away from home.  We learn a lot about life in the small town.  As I expected, a great job is done depicting life in the shtetl, with all sorts of fun details and minor characters.  Once the boy's father realizes he is gone he contacts the Russian police commissioner for the area and offers him what ever he wants to find his son.  Everyone suspects he and the girl left with the theater company.

We meet a number of people in the theater, from the manager to preformers and more.  I really enjoyed the scenes in Bucharest, then London and finally in New York City, which had a thriving Yiddish theater scene.  We see the theater members getting used to life in New York City.  Both, especially the girl, become super stars, courted by Gentile theatrical producers.

There are romances, intrigues, happy days and sadness.

The novel has lots of letters.  It can get confusing but that is Ok.

I enjoyed Wandering Stars. I suggest you first read some of his short stories and The Letters of Menakhem-Mendl and Sheyne-Sheyndl.  Your best way into Yiddish literature is the ten volume Yale University Press Yiddish library.

For those interested in theatrical history I suggest Yiddish Empire: The Vilna Troupe,Jewish Theater and The Art of Itinerancy by Debra Caplan, followed up by Wandering Stars.