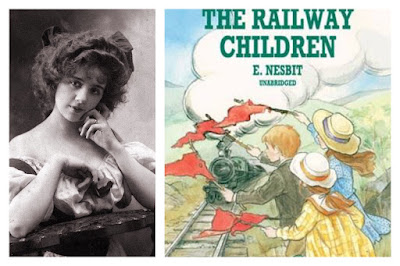 Website of Eleanor Fitzsimons - author of The Life and Love of E. Nesbit

I first heard of Edith Nesbit (who published as E. Nesbit) in biographies of Nancy Mitford and Rosamond Lehmann, two of my English favourite authors.  Both grew up with very

fond memories of the writings of Nesbit. In fact their own childhood seems like something Nesbit might have created.  Nesbit was a very prolific writer of what we now call young adult fiction.  I recently acquired in Kindle format a 9435 page "Ultimate Collection of the Work of E. Nesbit" with twenty novels and more than two hundred short stories and poems, for $0.99 (estimated reading time 113 hours and two minutes).

I love to read literary biographies.  I recently became aware that Eleanor Fitzsimons, author of Wilde's Women, has forthcoming in October this year
The Life and Loves of E. Nesbit.  A quick bit of research told me I wanted to read this book. (Nesbit, along with Beatrix Potter, a biography of which I have posted upon, are considered by many the UK's greatest writers of fiction for

children and young adults-Never having read anything by Nesbit I checked on Amazon for her highest rated books.  Among them was The Railway Children, available for free as a Kindle.  I finished this book yesterday.  I loved everything about it!  Reading it was a joyous experience.

The central characters are three children, two girls and a boy and their mother.  (My wife and I have three daughters
so I do like books featuring three children.) The time is maybe 1905, before the fall of the Czar.  The father is off stage for most of the storyline, his absence drives the plot.  Events necessitate the family move from their posh London home, selling much of their furniture, to a country home.  The courageous mother, you will love her, such mothers helped England endure and win two world wars, tells the children they "will be poor for a while".

Their new house is near a Railway.  They are not horribly poor but for the first time the children sense they must watch their money.  They seem to have some income and the mother makes money from publishing in magazines.

The children are fascinated by the train, they personify the locamotive as a red dragon.  They begin to wave at an elderly gentleman who is on the 913 AM train everyday.  Soon he begins to wave back. This relationship turns out to be a wonderful happenstance for the family.  One of the things I liked about this novel was just how fundamentally decent almost everyone the children encounter turn out to be.  Several characters seem gruff at first but soon they show a deep core of decency.  There are numerous cliffhangers (this was first published in serial fashion and I know I would have been an eagerly awaiting new chapters).  I don't want to spoil at all the plot as it is so gripping, such fun.

All of the characters, even the minor ones,  are very real.  The relationships of the children to each other was perfect. We see them develop in response to their situations.  Nesbit subtly depicts class differences in rural England.  The mother is obviously very cultured.  In a marvelous chapter we do meet a famous Russian writer.

I was wondering would today's mchildren still love this story.  Our daughters are now 21, 23, and 25.  Two are avid readers.  I will encourage them to try this novel.

I will start her The Treasurer Seekers very soon.

Once I have read a few more works by Nesbit, she has a number of short stories featuring cats, I willread Eleanor Fitzsimon's new biography.

You tube has the movie based on the novel. It is quite decent

Eleanor Fitzsimons is a researcher, writer, journalist and occasional broadcaster. Her work has been published in a range of newspapers and journals including the Sunday Times, the Guardian and the Irish Times and she is a regular radio and television contributor. She has worked as the sole researcher on several primetime television programmes for the Irish national broadcaster, RTE including an examination of the historic relationship between Britain and Ireland commissioned to coincide with the landmark visit of Queen Elizabeth II to Ireland. She is the author of the highly regarded Wilde's Women..from her publisher.

Oh. My. Goodness. That is an amazing collection. Are you planning to work through them all, one by one? *chuckles*

My favourite Nesbit memory is from another children's book, Edward Eager's Half Magic, in which the oldest daughter walks home with the younger children, from the library, in the summer, reading aloud from a Nesbit volume, then all evening and, then, finally, they get up early the next morning and she reads them the end. That's how I learned to read while walking! (Although I never loved Nesbit quite as much as they seemed to. I'm glad you have though!)