Pastor Dowe at Tacaté - A Short Story by Paul Bowles -1949 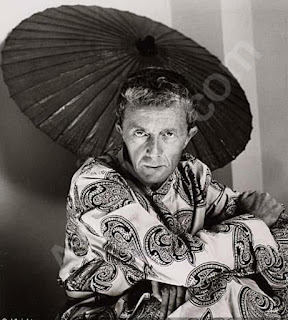 The Gateway to Paul Bowles 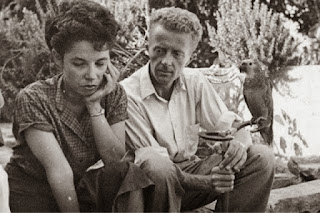 Paul Bowles (1910 to 1999), pictured above with his wife Jane Bowles, might be a writer of a forgotten era to most people, writing about  hash loving expats and exotic natives  living in Tangiers from some mysterious source of money while entertaining the elite of the stoned literary world.  I have read several of his stories and liked them all.  A while ago I got for only $1.95 an e book of his collected stories (sixty five of them) and I am slowly reading through them.   Imagine the film Casablanca, then think not of the semi respectable Rick's Cafe American but of the more noir  Blue Parrot and you can picture the world of a Bowles story.  If hanging out in the Blue Parrot leaves you cold, then probably you are not meant to be a Bowles reader.

"Mexican Tecate, hugging the fence, is a large agricultural town of nearly eighty thousand people. It is also the setting for one of my favorite short stories, “Pastor Dowe at Tecate,” by Paul Bowles. He has great difficulty in his attempts to convert the locals to Christianity, and he finds their attention constantly flagging when he preaches. He discovers that they brighten when he winds up his old phonograph and plays the 1928 show tune “Crazy Rhythm.” And so he plays it over and over as he delivers his sermons. Hoping to please Pastor Dowe, some men in his congregation try to tempt him with a thirteen-year-old girl, who shows up with a live baby alligator she hugs as a doll.” From On the Plain of Snakesby Paul Theroux -2019

I have been reading the travel writings of Paul Theroux on and off for years.  I as very happy to be given an advance revised copy of his forthcoming On The Plain of Snakes which is about his trip by car all along the Mexican-USA border.  Theroux is, as he tells us, 76 years old.  We sense he sees this as his last work.  Of course he talks about current political blather about the Mexican border towns.  I will probably post on this book soon but I do predict it will do very well.

He highly recommended a short story by Paul Bowles, "Pastor Dowe at Tecate", set in the Mexican town of Tecate.  The story seems set in the early 1930s.  Pastor Dowe's mission is to convert his Indian congregation to Christianity.  Then one day he is told people will like his services more if there is music.  Pastor Dowe, a recent widower, has and old phonograph his wife owned. He only has a few records.  He begins to play records and church attendance increases.

The story show the pastor and the church goers trying to marry Christianity to indigenous religion.  I admit I laughed when an Indian leader gave him a thirteen year old girl.  Clearly she is meant to serve his sexual needs and keep house.  He runs back across the border.

As far as I know, this story can not be read online.  I was happy to find it included in collection of his short stories I have.