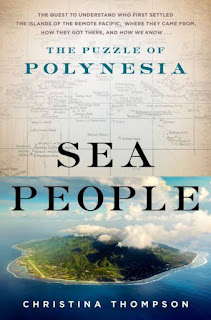 Sea People - The Puzzle of Polynesia by Christina Thompson, 2019, 362 pages

From the very start I loved this marvelous book.  It is the epitome of the very best narrative non-fiction.

“Sea People - The Puzzle of Polynesia is blend of Jared Diamond’s Guns, Germs, and Steel and Simon Winchester’s Pacific, a thrilling intellectual detective story that looks deep into the past to uncover who first settled the islands
of the remote Pacific, where they came from, how they got there, and how we know.”

I am very interested in the history of the Philippines.  Once you go back to the days prior to the conquest by the
Spanish everything is pretty much conjecture.  I have wondered where the first settlers of the Philippines came from.  The text book answer is it was traders from Malaysia and China.  But the archipelago as not unpopulated when they arrived.  Further the
expeditions were largely men only.  So who were the people they met?  Recent studies have found human remains over 700,000 years old in Luzon.  This is not the topic of Thompson’s book but from it I learned how linguistics evidence, cultural artifacts show the first inhabitants of the Philippines probably were part of a very long term migration from Madagascar.  I was fascinated to learn from Thompson that the linguistic diversity of an area is a reflection of how long it has been settled.  The 100 plus languages of the
Philippines testifies to a very old settlement.  It takes a long time for many languages to develop.

Here is the puzzle this book comes close to answering:

“For more than a millennium, Polynesians have occupied the remotest islands in the Pacific Ocean, a vast triangle
stretching from Hawaii to New Zealand to Easter Island. Until the arrival of European explorers they were the only people to have ever lived there. Both the most closely related and the most widely dispersed people in the world before the era of mass migration, Polynesians can trace their roots to a group of epic voyagers who ventured out into the unknown in one of the greatest adventures in
human history.
How did the earliest Polynesians find and colonize these far-flung islands? How did a people without writing or metal tools conquer the largest ocean in the world? This conundrum, which came to be known as the Problem of Polynesian Origins, emerged in the eighteenth century as one of the great geographical mysteries of mankind.” From Harper

Thompson spends a lot of wonderful time detailing the first encounters of Europeans and Polynesians.  Some were
peaceful, some violent. The two groups were very curious about each other.  Of course the sailors wanted sex and women were willing to service them for trade goods.  The people were considered very attractive. Thompson goes into a lot of details about  early studies and theories of Europeans.  Some thought the Polynesians were a lost tribe from Israel, others felt they were originally from South America or India.

Throughout the huge region, the people were similar in appearance, life style, religion, food and language.  Most islands had pigs, dogs chickens and an unwanted stowaway, the black rat.  They found some islands with only  dogs!
Thompson  helped me understand how language similarities can be used to help us understand the history of ancient societies.  Polynesia was a pre-literate society relying on the memory of bards for their historical knowledge.  Thompson explains how the Polynesians viewed their past.  They knew they had come from else where and these views are fascinating. She details the work of early European students of the culture.

Thompson goes into the history of theories of scholars and anthropologists from the mid-19th century up to the great strides made when radio carbon dating was developed (Thompson does a fine job explaining technical matters in a lucid fashion.)She ends the book talking about how DNA research and computer analysis has advanced the field.

Thompson's book is not just science.  Her husband is a Maori and her sons carry the DNA  of ancient Polynesian.

I loved this book for several reasons.  It taught me lots of history I did not know, in an intriguing fashion. Thomson showed me how conclusions are reached and justified.  I learned about language groups with thousands of items, including the 100s of languages of the Philippines.

Christina Thompson is the author of Sea People: The Puzzle of Polynesia,  from Harper, and Come on Shore and We Will Kill and Eat You All,which was shortlisted for the 2009 NSW Premier's Award and the 2010 William Saroyan International Prize for Writing.
A dual citizen of the United States and Australia, she was born in Switzerland and grew up outside Boston. She received her BA from Dartmouth College and her PhD from the University of Melbourne and held post-doctoral fellowships at the East-West Center in Honolulu and the University of Queensland before becoming editor of the Australian literary journal Meanjin.
Since 2000 she has been the editor of Harvard Review. A recipient of fellowships from the NEA, the Australia Council, as well as an NEH Public Scholar Award, she teaches writing at Harvard University Extension, where she was awarded the James E. Conway Excellence in Teaching Writing Award in 2008. Christina lives outside Boston with her husband and three sons.  From the authors website