“In 1953, Bellow’s The Adventures of Augie March struck out on a course so independent from the tide of American fiction that no literary lessons could flow from it: it left no wake, and cut a channel so entirely idiosyncratic as to be uncopyable.”. Cynthia Ozick 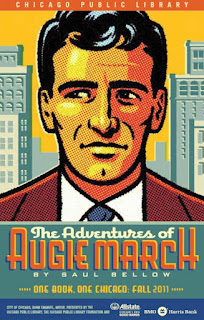 "1 IAM AN AMERICAN, Chicago born—Chicago, that somber city—and go at things as I have taught myself, free-style, and will make the record in my own way: first to knock, first admitted; sometimes an innocent knock, sometimes a not so innocent. But a man’s character is his fate, says Heraclitus, and in the end there isn’t any way to disguise the nature of the knocks by acoustical work on the door or gloving the knuckles." Opening lines of The Adventures of Augie March

As I read through The Adventures of Augie March, I kept thinking of the most famous poem ever written in celebration of an American city, “Chicago” by Carl Sandburg (1914).  You can be sure Bellow could recite it.  Chicago, in 1953 America’s second biggest city, seems, though full of Eastern European immigrants and a massive migration of African Americans from the south, the epitome of an American city.  Without apology to anyone Augie March chronicles his multifaceted life in Chicago.  Born a near orphan, he rises from poverty to old European wealth while pursuing various careers from book thief to smuggler of illegal immigrants.  Included is a kind of bizarre to me interlude in Mexico.  He sometimes depends on patronage of gangster like big business men, he has numerous romances.  Probably in 1953 the depiction of his sexual activity might have been shocking to some.

Augie loves reading.  He gets his start in the reading life through being given a set of The Harvard Classics which was charred a bit in a fire.  (The Harvard Universal Classics, originally known as Dr. Eliot's Five Foot Shelf, is a 51-volume anthologyof classic works from world literature compiled and edited by Harvard Universitypresident Charles W. Eliotand first published in 1909. - Wikepedia).  He draws from these readings though his life. Augie was am autodidactic of the first class.

The Adventures of Augie March is for sure the work of a powerful highly creative learned man. Bellow’s parents were Ashkenazi Jewish immigrants from Russia, he was fluent in Yiddish.

For students of America literature,this is am important novel.  I can see some saying it seems dated, from sixty six years ago.

Over last weekend 52 people were shot in Chicago, ten died, mostly in gang violence.  My bet is Augie March would just quote Heraclitus, grab a drink and go out looking for another woman but he would not move.

“The great novel of the American dream, of “the Universal eligibility to be noble,” Saul Bellow’s third book charts the picaresque journey of one schemer, chancer, romantic, and holy fool: Augie March. Awarded the National Book Award in 1953, The Adventures of Augie March remains one of the classics of American literature. An impulsively active, irresistibly charming and resolutely free-spirited man, Augie March leaves his family of poor Jewish immigrants behind and sets off in search of reality, fulfillment, and most importantly, love. During his exultant quest, he latches on to a series of dubious schemes–from stealing books and smuggling immigrants to training a temperamental eagle to hunt lizards–and strong-minded women–from the fiery, eagle-owning Thea Fenchel, to the sneaky and alluring Stella. As Augie travels from the depths of poverty to the peaks of worldly success, he stands as an irresistible, poignant incarnation of the American idea of freedom. Written in the cascades of brilliant, biting, ravishing prose that would come to be known as “Bellovian,” The Adventures of Augie March re-wrote the language of Saul Bellow’s generation.”

Hog Butcher for the World,
Tool Maker, Stacker of Wheat,
Player with Railroads and the Nation's Freight Handler;
Stormy, husky, brawling,
City of the Big Shoulders:

They tell me you are wicked and I believe them, for I have seen your painted women under the gas lamps luring the farm boys.
And they tell me you are crooked and I answer: Yes, it is true I have seen the gunman kill and go free to kill again.
And they tell me you are brutal and my reply is: On the faces of women and children I have seen the marks of wanton hunger.
And having answered so I turn once more to those who sneer at this my city, and I give them back the sneer and say to them:
Come and show me another city with lifted head singing so proud to be alive and coarse and strong and cunning.
Flinging magnetic curses amid the toil of piling job on job, here is a tall bold slugger set vivid against the little soft cities;
Fierce as a dog with tongue lapping for action, cunning as a savage pitted against the wilderness,
Bareheaded,
Shoveling,
Wrecking,
Planning,
Building, breaking, rebuilding,
Under the smoke, dust all over his mouth, laughing with white teeth,
Under the terrible burden of destiny laughing as a young man laughs,
Laughing even as an ignorant fighter laughs who has never lost a battle,
Bragging and laughing that under his wrist is the pulse, and under his ribs the heart of the people,
Laughing!
Laughing the stormy, husky, brawling laughter of Youth, half-naked, sweating, proud to be Hog Butcher, Tool Maker, Stacker of Wheat, Player with Railroads and Freight Handler to the Nation

Saul Bellow won three National Book Awards, the Nobel Prize and the Pulitzer.  No other American writer has been so recognized.  The Adventures of Augie March is a big sprawling very American novel focusing on the rise from poverty and ignorance of Chicago born Augie March.  (In the Fall of 2011 it was selected as the One Book, One Chicago title.

I will soon begin his Mr. Sammler’s Planet,about  a Holocaust survivor.

Lovers of America Literature, readers of Whitman, Dos Passos, Pynchon, give this book a try.

I've never read Saul Bellow, but I know, I know: I must do so sometime. The idea of this one being set in Chicago does interest me.

Over the weekend, I started to read Alaa Al Aweany's The Yacoubian Building (it's wonderful - I recommend it to you) and saw in the back of it an advertisement for the author's "new" book, called Chicago. Of course it's no longer "new" so it will be much easier to find, which I just might do when I've finished this one, and perhaps it would make a nice companion for this one, with yet another take of the city.