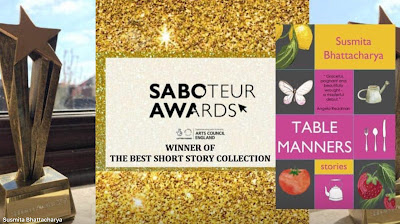 Gateway to Susmita Bhattacharya on The Reading Life

“When my missus died, I just ate and ate, and and grew larger and larger until I could barely fit into my armchair. What would she think, seeing this mountain who used to be her husband? I couldn’t move without getting breathless and needing to sit down. The doctor says it’s bad for my heart. So be it. I’m just fine sitting by the window, watching the world go by. And one day, I see a new face at the window opposite.” From Table Manners

Some short stories impact us for personal reasons, making us face possibilities we would sooner hide from, push way out of mind.  I won’t forget the narrator of “Table Manners”.

As I read the lines above, from the title story “Table Manners” from Susmita Bhattacharya’s award winning debut collection, Table Manners and Other Stories I had a

grim vision of the inevitable fate that awaits me if I survived my wife.  The geographic setting of the story is not spelled out but given toad in hole is on the menu, it must be England.

The man spends most of his day eating, cooking bland food and looking out the window.  He is pretty much in a waiting to die mode.

The man smells food cooking in the Chinese family across from him.  He notices a new person, a very old woman.  Suddenly she is at his door, gestilating for him to come with her.  He gets his walking stick and goes with her.  He helps rescue her cat from a tree, exhausting himself in the process. She insists he eat.  It is the first true home cooked meal he has had since his wife died.

Susmita Bhattacharya goes on to show how this chance encounter, with an older lady with whom he shares no language, seems to pull him out of his trough of dispair.  Maybe he can slowly start again.

“Table Manners” Is a very perceptive story, deeply impacting me.

I look forward to reading more stories by Susmita Bhattacharya.

I was born in Mumbai and graduated in applied art from B.D.Somani Sophia Polytechnic. I was apprentice to photographer, Farrokh Chothia, for a year before moving on to web and graphic design at Tata Interactive. After my marriage in 2000, I sailed around the world with my husband on oil tankers. We moved to Cardiff, Wales in 2004 where I did my Masters in The Practice and Teaching of Creative Writing at Cardiff University.

My novel was published by Parthian in 2015 and by Bee Books in India in 2017. I won a mentoring bursary from Literature Wales to work on my novel. It is long listed for the Words to Screen Prize by the Mumbai Association of Moving Images (MAMI).
My short stories have been published in literary journals in the UK and internationally, nominated for the Pushcart Prize,  broadcast on BBC Radio 4 and shortlisted for prizes.
My collection of short stories, Table Manners, was published in September 2018 by Dahlia Publishing.

My hobbies include photography, art, Bollywood films and travelling. And trying out new cuisines. And if I love a dish, I have to cook it!

Table Manners sounds like a wonderful short story. Excellent, concise review, I'd like to read this story.

This sounds so intriguing. Thank you for the post.