The Lady in Gold: The Extraordinary Tale of Gustav Klimt's Masterpiece, Portrait of Adele Bloch-Bauer by Anne-Marie O’Connor - 2012 - 370 pages 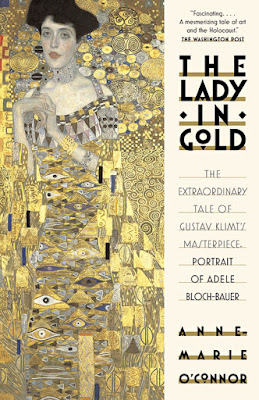 The Lady in Gold: The Extraordinary Tale of Gustav Klimt's Masterpiece, Portrait of Adele Bloch-Bauer by Anne-Marie O’Connor - 2012 - 370 pages

After the war, The painting remained in the  custody of an Austrian Museum.

In 2006 it was sold for $135 Million at Auction in London by Christie’s.  This was at The time a World Record price for a painting.

The Lady in Gold: The Extraordinary Tale of Gustav Klimt's Masterpiece, Portrait of Adele Bloch  should be read by anyone interested in Belle-epoque Vienna (normally considered to be from 1900 and ending in 1914), in the art of the period, especially that of Gustav Klimt, upper class Jewish society, and the politics of the closing days of the Austria-Hungarian Empire.  Vienna's  climate of acceptance resulted in a great flourishing of Jewish society in Vienna.  O’Connor elegantly describes this society while flourishing and under fatal attack.

This was a period where the painting of portraits was a lucrative profession.  Every affluent Viennese wanted flattering portraits of his family, men of their mistresses.  Klimt painted some of the women from the richest Jewish families in Vienna.  Much of the opening narrative of the book turns on Klimt’s reputation as a glamorous womanizer, never married but with numerous high society affairs attributed to him.  A portrait could take years of work, The Lady in Gold took three years, and long hours of posing privately with the artist. O'Oconor loved this era and made it come to life for me.

Of course we know the terrible changes coming to the Jewish community in Vienna. O'Connor skillfully contrasts the artistic career of another young Austrian, an aspiring artist, Adolph Hitler.  There is speculation that his rejection by a Viennese art school was part of the cause of his hatred of Jews.  As one must, O'Connor goes into life in Nazi Vienna, mentioning figures such as Sigmund Freud, Billy Wilder, Heddy Lamar, and Stefan Zweig. The Nazis considered work by Gustav Klimt and other Jewish artists of the period as "degenerate". So called German art experts began stealing these works.  Klimt's paintings were considered very decadent, antithetical to "Aryan values".  O'Connor explains the fate of Klimt's work.

The narrative opens in Los Angeles, California in 2002 or so.  An elderly descendent of the Bloch-Bauer family has engaged an attorney to try to recover the Klimt paintings stolen from her family.  In 1998 Austrian laws were passed requiring the return of Art stolen by the Germans to their rightful owner. In 2004, with the assistance of the US Supreme Court, the Klimt portraits were turned over to family members.

Being there at the sale of the Klimt works at Christie's was a lot of vicarious fun.

The Lady in Gold: The Extraordinary Tale of Gustav Klimt's Masterpiece, Portrait of Adele Bloch-Bauer by Anne-Marie O’Connor is a fascinating look at how the Holocaust impacted the art world.

This fine book motivated me to look at images of the work of Gustav Klimt, works of stunning beauty. For that alone I am grateful to Anne-Marie O'Connor

I loved this copiously illustrated documentary on the life and work of Klimt linked below.

The website has images of numerous paintings, pictures of various portrait subjects.

Anne-Marie O’Connor is a veteran foreign correspondent and culture writer who has covered everything from post-Soviet Cuba to American artists and intellectuals. O’Connor attended Vassar and the San Francisco Art Institute and graduated from the University of California at Berkeley, where she and fellow students co-created an award-winning documentary on the repression of mural artists after the 1973 military coup in Chile. She covered the wars in El Salvador, Nicaragua, and Guatemala as a Reuters bureau chief in Central America; the Shining Path guerrillas in Peru, coups in Haiti and U.S. interventions in Haiti and Panama; and covered Cuba and Haiti for a newspaper chain. At the Los Angeles Times she chronicled the violence of Mexico’s Arellano-Felix drug cartel, U.S. political convention; and profiled such figures as Nelson Mandela, George Soros, Joan Didion, John McCain, and Maya Lin. Her story on Maria Altmann’s effort to recover the family Klimt collection appeared in the Los Angeles Times Magazine in 2001. She has written for Esquire, The Nation, and The Christian Science Monitor. She currently contributes to The Washington Post from Jerusalem.

I  give a complete endorsement to The Lady in Gold: The Extraordinary Tale of Gustav Klimt's Masterpiece, Portrait of Adele Bloch-Bauer by Anne-Marie O’Connor.

How utterly serendipitous your posting this on the very day I spend in an Austrian Museum gazing at Klimt’s paintings! Needless to say the book has been ordered ....

Lizzy Siddal. I would love to see some of his work. Just the online images amazed me. I am happy for you and hope you enjoy the book.

Love Klimt’s work. My own possessions of his work is limited to bookmarks and postcards. Interesting book indeed, which obviously has to be read.