“To be in Marseille, not Paris, still carried a certain novelty, a whiff of the unknown. If Paris reeked of sex, opera, art, and decadent poverty, Marseille reeked of underground crime, opportunism, trafficked cocaine, rowdy tavern song. Paris was a woman, a fallen woman in the arms of her Nazi captors; but Marseille was a man, a schemer in a secondhand coat, ready to sell his soul or whatever else came quickly to hand”. 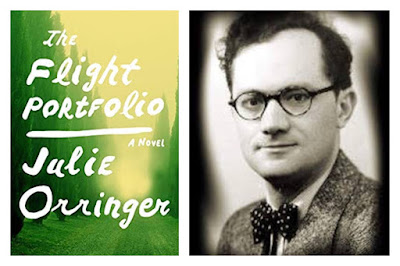 Varian Fry's father was an affluent stock broker, the epitome of Protestant Wasp gentility.  Fry, a Harvard graduate, was meant to join the American between the wars elite.  In 1935 he took a trip to Berlin.  He was deeply appalled by the violence directed against Jews by the Germans.  Five years later he is living in Vichy controlled France, in Marseille, directing the American funded Emergency Relief Committee.  Their mission was to get prominent Jewish artists, intellectuals and anti-Nazi dissidents to the United States.  He eventually helped over 2000 people designated for deportation to death camp escape.  (1994 - Fry became the first United States citizen to be listed in the Righteous among the Nationsat Israel's national Holocaust Memorial, award by Yad Vashem.From Wikipedia)

Orringer has turned this history into a true master work.  She makes Marseille into a character in the novel.  I felt very much I was walking the streets of Marseille, feely a bit too secure, smelling the sea, eating the food, dealing with corrupt officials and ordinary French citizens trying to figure out how to survive the food shortages.  Fry finds his clients challenging, among them are the great artist Marc Chagal, Hannah Arendt, Thomas Mann's son and daughter in law, numerous Surealists and anti-Nazi leaders.

Orringer shows us lots of people involved with the work.  Everyone is totally viable.  The people all were very interesting. Marseille is a dangerous place.  The Vichy government is under the thumb of the gestapo.

A romance is center stage in Flight Portfolio (I really liked the name of the novel once I learned where it comes from) between Varian and another man. This relationship goes back to their days as Harvard students.  The other man is hiding a secret.  Varian is married, his  wife is rich, eight years older and she accepts his attraction to men.

There are  interesting plot turns  among frequent exciting developments in the efforts to get people out of France.  Varian finds way to deal with all sorts of problems, though he has his failures.

I found Flight Portfolio deeply enthralling, almost painfully  so at times.  I did wonder how the hidden family background of Varian's boyfriend related to the Germans treatment of Jews.  I think we are being told to look deeper into our own history.

Flight Portfolio is a beautiful profound work of art.  I give my great thanks to Julie Orringer for the years that went into this novel.

I hope to read her debut novel The Invisible Bridge in July.

Julie Orringer is the author of two award-winning books: The Invisible Bridge, a New York Times bestselling novel, and How to Breathe Underwater, a collection of stories; her new novel, The Flight Portfolio, tells the story of Varian Fry, the New York journalist who went to Marseille in 1940 to save writers and artists blacklisted by the Gestapo. All her work has been published by Alfred A. Knopf, and her books have been translated into twenty languages. Her stories have appeared in numerous anthologies, including The Granta Book of the American Short Story and The Scribner Anthology of American Short Fiction. She is the winner of the Paris Review’s Plimpton Prize and has received fellowships from the Guggenheim Foundation, the National Endowment for the Arts, the Cullman Center at the New York Public Library, the Radcliffe Institute for Advanced Study at Harvard, the MacDowell Colony, and Yaddo. She lives in Brooklyn with her husband and children, and is at work on a novel set in New Orleans. From the author's website

I like the background to the story and the setting very much. Thank you for the review.

I love the fact that she takes her time with these stories. Now I am doubly curious about the novel she's working on now, with a New Orleans setting!