"At the Club" by Katherine Mansfield 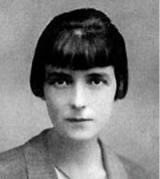 
An Update on The Katherine Mansfield Project

"“The pursuit of experience is the refuge of the unimaginative.”
Katherine Mansfield


I have done by far more posts on Katherine Mansfield than I have on any other author.   When I first decided to post on all 85 or so of her stories, I posted on them in groups of four or five but then I decided as my tribute to Mansfield (whose work and person I have come to hold in very high regard) I would post on each of her stories individually.   When I first began the posting on these stories, about 1.5 years ago,  I thought well this is going to cost me most of my few readers but it turned out happily to be just the opposite.   The most viewed post ever on my blog (out of 670 now) is one I did on "Miss Brill".    By looking at my blog stats I can tell when a Mansfield story was assigned reading in a university anywhere in the world.

In the first phase of my reading of the Mansfield short stories I simply read all of the stories in the four collections put out either by Mansfield or her husband. I knew there were other early Mansfield stories that were not included in any of the four books.   I assumed that was because Mansfield or  John Middleton Murry did not think the stories were up to the standards they wanted in the collections.    I also did not yet know where to read the remainder of her stories online but now I do.


I will dedicate a brief post to each of these stories.   I have no sense or wish to "complete" my project as I will also be posting on new books on Mansfield as they come out in the future and may take second looks at some of her most famous stories.    There are 18 of these stories but I think the total page count would be under 50.

"At the Club" is self described by Mansfield as a pastiche.   "Pastiche" is open to a couple of readings as to what it meant 99 years ago.   It seems most logical to take it as meaning a hodge podge of events and episodes thrown together.  Basically this story, it has no plot, drama, or development, is a walk through an upper class club  with your ears and eyes very wide open.   It is a very funny social satire.   We get to hear some very biting conversations between women in the story concerning the men in their lives.

"At the Club can be read online HERE

I have a collection of Katherine Mansfield's stories. I need to sit down and relax....read each one. I really enjoy your blog.

A fascinating snapshot of time/place.. thanks for sharing!

Love the line: turning over newspapers and magazines as though they were pieces of bread in the process of toasting.

I keep meaning to read more of Mansfield, but I only seem to remember as you post her stories!