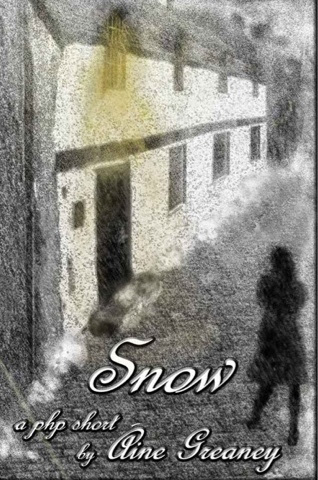 "Snow" is a deeply moving story centering on a middle aged woman, Delores, who moved from Donegal in the west of Ireland to New York State many years ago.  She has been married to an American for a long time and has a decent job as a buyer for a construction company.  She came back to Ireland when her cousin Bridgie, who began to run the family shop nineteen years ago when Delores' mother passed, called her and told her that her father had taken a terrible fall.  The father is an irrascible old man, made bitter by the passing of his wife and siblings, a feeling compounded by what he sees as the desertion by Delores, his only daughter, when she moved  to America.  The shop is on the first floor, the dwellings above.  People come in the shop for their daily needs.  The big town event is the purchase of a nearby hotel by a man from Dublin.

Greaney in just a few pages does a masterful job of showing us, with great verisimilitude, what it feels like from both sides for an adult child, well into middle age, to be necessitated to move back into the parental home to take care of an aged parent. I know because I did this myself.  The child cannot help but resent the loss of freedom and does not like being treated as a kid and the parent is equally resentful at what he sees as an ungrateful child without proper sympathy and respect.

Greaney makes us feel the claustrophobic setting, the sounds and the smells of decrepit old age.

There is a quite shocking development at the denoumont of "Snow".  I will leave it untold.  It will make you think for sure.

I read "Snow" three times.  It is beautifully written.

This stour is published by Pixel Hall, a dynamic company with a most interesting very literate range of titles.

I hope to be able to read much more by Aine Greaney.

I'm a transatlantic writer, in that I was born and raised in County Mayo, Ireland, and I'm now living on Boston’s North Shore.
As well as writing, I lead writing work shops at various schools, arts organizations, libraries and colleges in New England and beyond. For information on my programs and workshops, visit the Mass. Cultural Council artist profile.l

Among my writing awards and shortlists are the Hennessy Award for New Irish Writing, the Fish Anthology, the Rubery International Book Award, the Frank O'Connor Award, the Irish News Short Story Award and Indie Lit 2011. My essay, "Green Card" was cited as a notable in "Best American Essays," and my essay, "Sanctuary" has just been nominated for a Pushcart Prize.
As well as working, writing and teaching, I get out and about now and again. I belong to local and regional arts and writing organizations, including PEN New England, the New Hampshire Writers Project and the American Conference for Irish Studies.
I travel back to Ireland frequently.

To the shores of Americay

I was born and brought up on a small farm in County Mayo, Ireland. My home parish is best known for the filming of that iconic Irish movie, "The Quiet Man" and for contributing the word "boycott" to the English language.

In 1986, after a brief career as a primary-school teacher, I moved to the U.S. In those days, 25% of Irish college graduates left their country for continental Europe, Australia or the U.S. I write about this experience in the essays, "The Borders We Cross," in Stone Canoe: A Journal of Arts and Ideas from Upstate New York, and in "I Hate Saint Patrick's Day" atSalon.com.  It's also the topic of my current book-in-progress.
After working the usual hodgepodge of jobs, I went back to college to study for a master's in English. I also got accepted to a fiction-writing intensive at the New York State Writers Institute at the State University of New York, which is where I finally got the skills and courage to finish and publish a short story.
From upstate New York, I moved to Boston's North Shore.

These days I live and write where the Merrimack River meets the Atlantic Ocean. The Merrimack Valley was the cradle of America's industrial revolution. In fact, Charles Dickens is reputed to have visited the area's mill towns and to have written back to his native England praising this pristine example of U.S. industrialization.
Inside these loud and terribly unhealthy textile mills, the machines were mostly worked by girls and women. The 'mill girls' founded America's first literary journal which featured the writings of young female immigrants from places like Quebec, Poland and Ireland.
So I live and write at the crossroads of America's industrial and maritime histories--the perfect spot for a transatlantic writer.

I became smitten with the short story form as a student in my convent secondary school in Ballinrobe, County Mayo. To this day, I remember reading Padraic O Conaire (Irish Gaelic) and Guy de Maupassant (the great French story-author) and loving the art and artifice of each short work. I've published my own short stories in Irish and U.S. literary journals and anthologies.
Most recently, I've published personal essays in "Under the Sun," "Boston Globe Magazine," "Salon.com,"  "Stone Canoe: A Journal of Arts and Ideas from Upstate New York," "The Daily Muse" "Forbes," "When Women Waken," "Generation Emigration (The Irish Times), The Feminist Wire and "Merrimack Valley Magazine."
Other outlets include Creative Nonfiction, The Literary Review, The Fish Anthology, Natural Bridge, IMAGE Magazine," "Litro" and "The Sunday Tribune."
In September 2006, my short-story chapbook collection, The Sheepbreeders Dance was released by Flume Press (California State University).
Other publications include my debut novel, The Big House (TownHouse/Simon & Schuster, `03) and the gift/travel book, Newburyport: A Photographic Portrait (Twin Lights Publishers).
Among my awards and shortlists are The 2011 Indie Lit Award (runner up, literary fiction); The Rubery International Book Award (longlist, fiction); Flume Press Short Fiction Chapbook Contest `05, The Frank OConnor Short Fiction Award, the Irish News Short Story Awards, The Steinbeck Award and The Hennessy Award for New Irish Writing.
My second novel, Dance Lessons, set in County Mayo and greater Boston, was published last year by Syracuse University Press. My how-to writing book, which offers guidelines on balancing a day-job with a creative writing life, was released by Writers Digest Books (2011).
I work in healthcare, and have a growing interest in narrative medicine or the intersection of writing, the arts and healing. I am a lifelong journal keeper.

I hold a B.Ed in teaching and an M.A. in English.

I know the feeling myself and I think I have come to the age where many of my friends face the same situation. There are lots of unresolved issues.