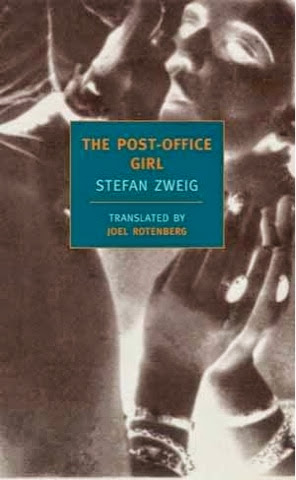 The publication and time of writing history of The Post Office Girl by Stefan Zweig is, based on my research of about ten sites including that of the publisher of the translation, The New York Review of Books, not clearly known.  It was unpublished on Zweig's death in 1942 and was probably written in the 1930s.  The Nazis burned as much of his work, and many of his readers, as they could find.  It was evidently first published in a German in 1988. 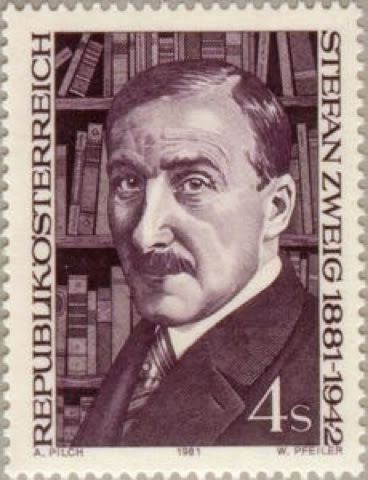 I have posted on a number of works by Stefan Zweig, including Chess Story and his autobiography The World of Yesterday and a few of his many short stories.  Like his friend Joseph Roth, he can be seen as chronicler of the decline of what was once the Austro-Hungarian Empire.
The Post Office Girl, set in 1926 in a small town in Austria, centers on 28 year old Christine, the clerk at the town post office.  Zweig does a wonderful job in letting us see, feel, eat and smell the grinding poverty of life in 1926, with Austria still suffering the ravaging after impacts of W W One.  She lives with her very unhealthy mother in a small flat.  She is a perfect employee in her utterly boring job.she barely makes enough for her and her mother to live.  Everything spent must be carefully considered.  One day she gets a telegram advising her that her aunt, a sister of her mother who loved to America thirty years ago under clouded circumstances is back with her wealthy American husband and wants Christine to come visit them in Vienna for two weeks, staying in a Grand a Hotel style establishment.
Christine has taken no vacation ever in her years of service and is granted two weeks.  She makes arrangements for her mother' scare and with great excitement and some trepidation takes the train to Vienna.  Upon arrival she knows at once her shabbily put together clothes, even her suit case, are out of place.  Her aunt takes her shopping and soon she is transformed into a woman mistaken for a member of the wealthiest family in Germany.  Soon she has any number of suitors, including a 68 year old retired General.  There are lots of brilliantly, sadly so, class markers in The Post Office Girl.
Christine is at first overwhelmed, then she begins to reflect on how terrible her real life is in comparison to the lives of the people in the hotel.  She begins relationships with men, she had as far as we know, no romances prior to this and was probably a virgin, going along with the idea she is very rich.
I do not want to give away too much of the interesting plot but of course something bad happens at about midpoint which makes life even harder to bear for Christine.
This is a very much worth reading book and an excellant look at the period.
Please share your favorite Zweig works with us.
How do you like the second half of the novel?
Mel u

I really liked this when I read it. I wanted it to be a 'Cinderella' story, but it was far from that. Zweig was brlliant at creating the mind of the protagonist on the page.

Violet, I admit I also really holed Christine would end up with a wealthy spouse.

I have Chess Story in my TBR stack and really should get around to reading it.

Have a couple of his books on my shelves, must read them