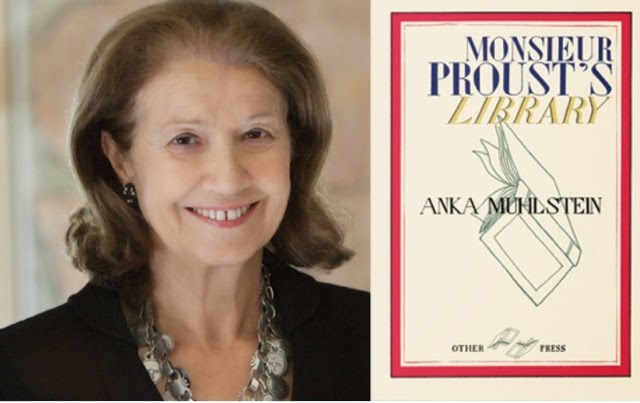 My recent reading of Marcel Proust's In Search of Lost Time (sometimes translated as Remembrance of Things Past) was one of the greatest experiences of my life.  I will very soon begin again.   As I read through I thought that this might be the ultimate book about people who lead reading centered lives.  Everyone reads in the world of Proust.  I loved it when Princess Guermantes said there was nothing better in life than reading.    Anka Muhlstein in her short very pleasant highly cultured book, Monsieur Proust's Library helped me to understand how classic French literature helps structure the novel and she also lets us know a lot about the writers that Proust most admired.
Among English writers he loved Robert Louis Stevenson, George Elliot,and above all Thomas Hardy.
The most mentioned writer in In Search of Lost Time is Honore de Balzac. Refrences to Balzac permeate the work.  People have extended conversations about Balzac and relate events in their own world to La Comedie Humaine.  One glaring difference between Proust and Balzac is that if a character in one of Balzac's works is rich, he explains how they got rich in detail.  In Proust we don't find this.
We also learn of the great importance of Racine and Baudlieire to Proust and his novel.
We learn the Proustian difference between good and bad readers.  One intriguing chapter is devoted to the "homosexual" reader.
In the closing lines of the book, I was deeply impacted and knew she was very right when Muhlstein said one of the meaning of a search for lost memories was in a rediscovery of old books.
I really am glad I read this book.  I strongly endorse it to all readers of Proust.  It is very much worth reading and is itself a work of art.   By all means read Proust first.
Muhlstein has a book on Balzac and I hope to read that soon.
Ms Muhlstein gave a very illuminating lecture centering on the influence of Balzac on Proust which can be heard here
https://m.youtube.com/watch?v=-3vdn9WC3js

Anka Muhlstein was awarded the Prix Goncourt in 1996 for her biography of Astolphe de Custine, and has twice received the History Prize of the French Academy. Her books include  Balzac’s Omelette and, most recently, Monsieur Proust’s Library. From the NYRB webpage.