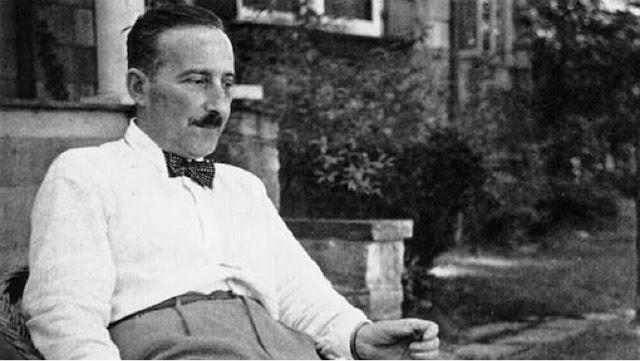 My Posts on Stefan Zweig
Stefan Zweig (1881 to 1942, born Austria, died Brazil) is experiencing a great resurgence of interest, partially thanks to Pushkin Press and The New York Review of Books publishing English translations of much of his very large body of work.   I have read and posted on a number of his works and intend to keep reading him.   (My date of publication for this story is a guess. I read it in The Collected Stories of Stefan Zweig, translated by Anthea Bell.  I really wish this valuable collection included the original date and place of publication for each story.)
"The Downfall of the Heart" centers on an affluent sixtyfive year old Jewish businessman.  Working since he was fifteen, the man is on holiday with his wife and nineteen year old daughter.  They are staying at a posh hotel in Italy. He hears a noise.  To his heartbreaking horror, it is his he thought virginal daughter sneaking out of a room down the corridor from their suite.   He is almost apoplectic in his rage over this. He cannot help but imagine his daughter naked in a man's bed.  He drives himself to despair trying to figure out which of three young men in the hotel his daughter slept with.   The man has never really done anything but work to give his wife and daughter a good life.   He knows the people in the hotel his wife and daughter socialize with look down on him as not much more than a rich old Jewish peddler.   He feels out of place and uncomfortable in the company of these people.  He tells his wife he wants to end the holiday early and go home.  He ends up going back alone, his wife finding his idea outlandish.  Zweig masterfully sets out the terrible impact this has on the man.  The ending is terribly sad and i will leave it unspoiled.  The story is very visual and I could see the decline of the old man, his withdrawal into himself.
I really liked this story a lot.
Mel u

Interesting about Zweig, who has inspired "The Budapest Hotel" and whose stories are also available in a German Easy Reader. Also much on You-Tube about him. I am also interested in his friendship with Joseph Roth, another enormously interesting author.