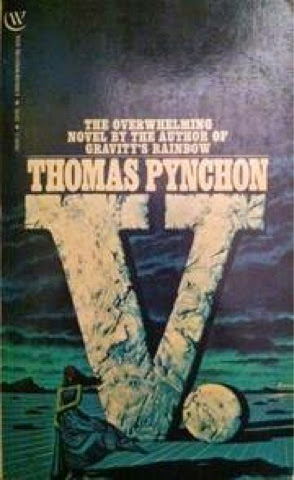 I first read V in 1974 because I wanted to read the first novel by Thomas Pynchon, the author of Gravity's Rainbow.  I have read Gravity's Rainbow at least ten times since it was published in 1973.  I am firmly convinced it is the best novel ever written by an American and on the strength of it I believe Pynchon to be the greatest living writer in the world.
This morning I finished V for the second time.  As I read it, I had to see it mainly as the first novel by the author of Gravity's Rainbow. It has many of the same themes, narrative methods, plot lines, historical references,World War Two action and political motifs as does Gravity's Rainbow. It is loaded with obscure references the literary detective will love. It has lots of sex of all sorts.  It roams much of the earth in search of a multifaceted female entity called, among other names, V.
V is not real easy to follow.  It jumps around a lot in time and space and points of view.  Parts of it are really amazing.  It is Pynchon's first novel but I don't think it should be your first Pynchon.
I would suggest that those new to Pynchon first read The Crying of Lot 49, which has the virtue of being his shortest novel with a pretty linear plot line. Then if you like it, take the plunge and try Gravity's Rainbow.

I know this is a post about V, but I'm reeling because you've read Gravity's Rainbow at least TEN times. Perhaps I should read one of Thomas Pynchon's novels ONE time!

You are so widely and so well read that you put most of us bloggers to shame. I've actually never read Pynchon, though I was a brand new bookseller when Mason & Dixon was published. He's always intimidated me, and I feel bad that his works are a gaping hole in my reading background that I would otherwise consider pretty strong.

Suko, start with The Crying of Lot 49. It s set in Southern California and it is short..

As the Crowe Flies and Reads. Thank you for your kind remarks.