"The Dandelion" by Wolfgang Borchert (1947). Translated by PeterWortsman.

"Then There is Only One Thing to Do". (A very powerful anti war poem, universal in power) 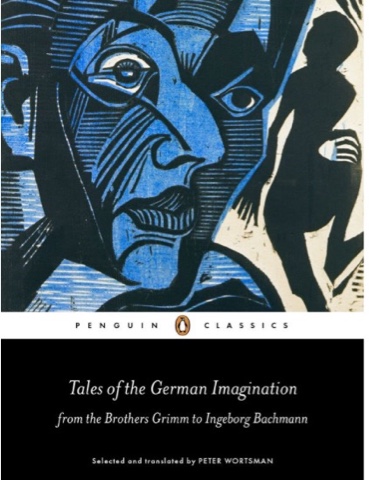 I highly recommend this collection of short stories

6.  The Tanners by Robert Walser. a serious work of art 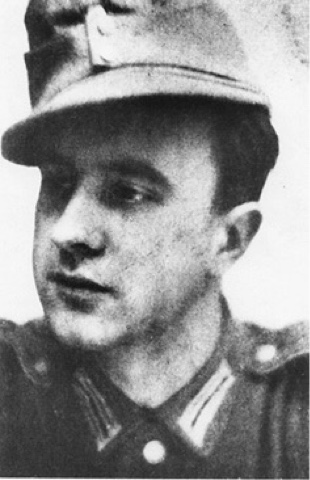 The short stories of Wolfgang Borchert  let us see how a German draftee who hated being a soldier so much he probably shot off one of his own fingers in a vain effort to get of the army.  The public Anglo-American image of a German soldier is that of a blood thirsty savage loving nothing more than killing for his Furher.  History is written by the winners but we have the short stories of Wolfgang Borscht to let us see at least one man did not fit this pattern.

"The Dandelion", published posthumously in 1947 in a collection of that name is luckily included in Tales of the German Imagination From the Brothers Grimm to Ingeborg edited, introduced and translated by Peter Wortsman.  I featured some stories included in this wonderful anthology last year and have several more on my list for this year.  I also found a webpage with lots of translations of his stories besides "Dandelions".  (You can find it at the link at end of this page.)

"Dandelion" is told from within a German military prison toward the close of World War Two.  Most of the prisoners are army deserters, those seen as subversives, i somehow imagined this was a story of what might have happened had Robert Walser been drafted into the German Army!

The first person narrator is in cell 242. The action of the story takes place in the exercise yard.  The men are marched around chain gang fashion.  The narrator fixates and begins for no provoked reason to hate the man in front of him. His description of the man shows how he himself has been brutalized by his experience  into hating a man who has done nothing to harm him.

"Why must Hairpiece –let me hereby dub him, it’s simpler that way –why must he keep walking and living, while young sparrows that haven’t yet learnt to fly fall to their death from the gutter on the roof? And I hate Hairpiece for his cowardice –how cowardly he is! He feels my hatred burning the back of his head while trotting around there before me, always in the circle, the same damned little circle surrounded by grey walls,"

I will leave the rest of the plot untold as I hope some will read this story.

Wortsman provides us with a very interesting biography of Borchert 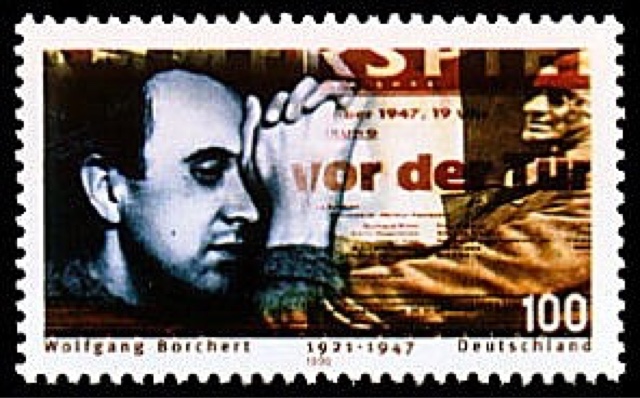 Wolfgang Borchert (1921–47), whose searing poems, short stories, plays and anti-war manifesto made him a major proponent of what has come to be called Trümmerliteratur (rubble literature), hardly lived long enough to leave footprints on posterity. Born in Hamburg, he fled his apprenticeship to a book dealer to study drama and joined a travelling theatre group. But military service in the Wehrmacht on the Eastern Front in the Second World War provided more drama than he could bear. Writing home about the horrors he’d witnessed and the miserable conditions, he was arrested by the Gestapo and charged with treasonous statements. A death sentence was commuted to eight months in prison, whereupon he was returned to the Front. Thereafter, one day returning from sentry duty with the middle finger of his left hand missing, he was accused of self-mutilation to evade military service and once again arrested, this time being placed in solitary confinement, after which he was yet again returned to the Front. Frostbite and hepatitis reduced him captured by the French, he escaped and walked all the way home to Hamburg. In the little time left he wrote poetry, short fiction and drama that scorch the page and sizzle on stage. He died in 1947 in a hepatic sanatorium in Basel, after drafting his anti-war manifesto Dann gibt es nur eins! ( Then We Have Only One Choice!)"

A link to a number of stories in translation. Most are brief.  If I have time, I will post on a few more of his short stories.

I can't recommend this anthology highly enough. it was my book of the year in 2013, and I was deeply impressed by Borchert's contribution to it. I wanted to read more by him, so especial thanks for the link,

This anthology does sound fascinating, Mel. Enjoy your reading this week, Mel (as if I really needed to say that to such an avid reader).

I would love to do a short film based on The Dandelion. Any producer interested? German educated filmmaker from Kenya.