World War One
July 28, 1914 to November 11, 1918
Estimated deaths around thirty million, some say as high as forty million
Resulted in the ending of the Austro-Hungarian, Ottoman, German and Russian Empires
Brought America to a position of dominance and out of isolationism
Set the stage for WW II and the Holocaust
"Prussia, the ruler of Germany, was always an enemy of the intellect, of books, of the Book of Books—that is, the Bible—of Jews and Christians, of humanism and Europe. Hitler’s Third Reich is only so alarming to the rest of Europe because it sets itself to put into action what was always the Prussian project anyway: to burn the books, to murder the Jews, and to revise Christianity."  Joseph Roth 1933 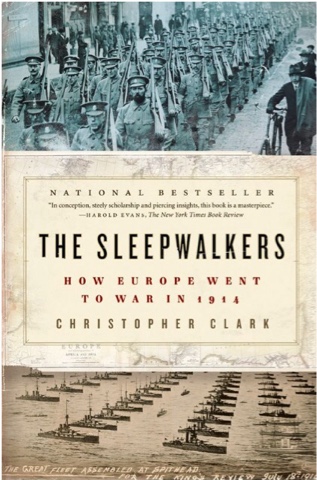 Recently I read Christopher Clarke's very comprehensive book on Prussia, The Iron Kingdom The Rise and Decline of Prussia 1600 to 1947.  There is more to German history than Prussia but for sure Prussia was the dominating force in German politics until the defeat of Germany in World War Two.  Understanding Prussia is essential to understanding European history from 1600 on.  Recently I received an E mail saying another history by Clark, The Sleepwalkers How Europe Went to War in 1914 was for a short time available as a Kindle edition for $1.95 so I quickly acquired this book.
War War One has been called "the war of cousins" as tne combatants were headed by royals descended from Queen Victoria.  The taught in school version is that it started when the heir to the Thorne of the Austro-Hungarian Empire, Archduke Franz Ferdinand was assassinated.  Of course the reasons why this political murder by anarchists without any real national affiliation led to the Great War are very complicated and rooted in the past.  Clark does a wonderful job of explaining why the war happened.  He explains the structure of decision making in the various countries, the relationships involved.  There is just a huge amount to be learned from this book.
I really liked it when Clark made references to the work of Stefan Zweig and Joseph Roth, both were.Viennese Jews but was a bit surprised he made no reference to Herman Broch's classic novel about Germany between the wars also called The Sleepwalkers.
If you seek a real understanding of why the war occurred, I highly recommend this very serious book.
For more of a popular history you might first read The Guns of August by Barbara Tuchman.
Wikipedia also has a very good article.
Without understanding  World War One you cannot fathom why World War Two happened, the holocaust and in fact much of the international political drama that dominates the world today.
Mel u

I've been meaning to read this book for a while now so I'm glad to see that it should be worthwhile reading...when I eventually get round to it.

At my local library I found Ring of Steel which is a history of WWI as seen from Germany. I have often noted that here in the UK the story of WWI is mostly told from a UK perspective, which is understandable but I've often wondered how Germans experienced the war.

Excellent book. I am reading it since some time ago. Still only in the beginning, but I like the way he writes. There are those historians that can vitalise history and make it more exciting than any thriller. I think he is one of them.