Ostend, Stefan Zweig, Joseph Roth, and the Summer Before the Dark by Volker Weidermann, 2014, translation by Carol Janeway,forthcoming 2016)

Works I Have So Far Read for German Literature Month Five
1.  We All Die Alone by Hans Fallada.  Magnificent work on life in Nazi Germany 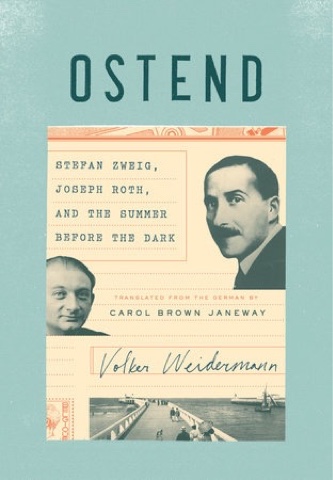 I have read a good bit of both Stefan Zweig and Joseph Roth and I will be reading at least two more of their works for G L V so I was very happy to be given a review copy of Ostend Stefan Zweig, Joseph Roth and the Summer Before the War by Volker Weidermann.
This is a book anyone with a serious interest in the work and lives of Joseph Roth and Stefan Zweig will find fascinating and very edifying.  I greatly enjoyed reading it.

The author assumes you have a good familiarity with the work of both authors and I think it is a logical assumption about potential readers. 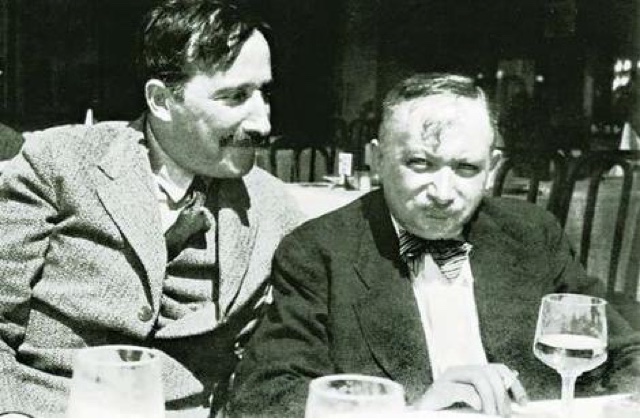 Besides being a cultural history of ex-Austro-Hungarian empire writers in the years just before World War II, it is a story of a  friendship between two great writers, Stefan Zweig and Joseph Roth, both flawed men, both deeply "old world" in their culture and both horrified by the vision of Nazi dominated Europe they see coming. The two men were very different in lots of ways but similar in others.  Both needed or used women as kind of crutches or muses.  It is set largely in 1936.

We see Roth's drinking more and more, his death is portrayed as suicide by alcohol.  Some writers, including Michael Hoffman and Hannah Arendt have been harshly critical of Zweig for his seemingly escapist attitude toward the ever growing power of Nazis.  The author  addresses this issue and talks about what he sees as the reason for the suicide of Zweig and his wife in Brazil.  Both writers saw the destruction of European culture as destroying the only world in which they wanted to live.  Of course if either could have lasted five more years they might have had twenty plus more productive years.

Ostend, in Belgium, was at the time an allegedly neutral country where Jewish intellectuals could feel relatively safe.  There are lots of very interesting minor characters and the book is a treasure trove of reading ideas.

Summary
⇑
The true story of two of the twentieth century’s great writers, exiled from Nazi Germany to a Belgian seaside resort, and the world they built there: written with a novelist’s eye for pacing, chronology, and language—a dazzling work of historical nonfiction.

It’s the summer of 1936, and the writer Stefan Zweig is in crisis. His German publisher no longer wants him, his marriage is collapsing, and his home in Austria has been seized. He’s been dreaming of Ostend, the Belgian beach town—a paradise of promenades, parasols, and old friends. So he journeys there with his new lover, Lotte Altmann, and reunites with his semi-estranged fellow writer and close friend Joseph Roth, himself newly in love. For a moment, they create a fragile paradise. But as Europe begins to crumble around them, the writers find themselves trapped on vacation, in exile, watching the world burn. In Ostend, Volker Weidermann lyrically recounts “the summer before the dark,” when a coterie of artists, intellectuals, drunks, revolutionaries, and madmen found themselves in limbo while Europe teetered on the edge of fascism and total war.

Contributor Bio(s)
⇑
VOLKER WEIDERMANN is the literary director and editor of the Sunday edition of Frankfurter Allgemeine Zeitung and the author of a number of works of literary history and critical biography.

Ooooooh! This is the German book Thomas reviewed during GLM IV. So good to know that the English translation is forthoming. I love Pushkin Press ... is thee any indication of the translator, Mel?

Ha - excellent book! And thanks to my modest effort last year there is even a Bulgarian translation upcoming. Now that I think about it I can say that what I loved most was the seemingly effortless ease with which the author re-created the unique atmosphere of Ostend at that particular moment, half holiday idyll, half dance on the volcano. Volker Weidermann has moved on in the meantime: he is now the host of the "Literarisches Quartett", an extremely popular talk show about literature (created by the legendary Marcel Reich-Ranicki) in German TV and he is also now "Literaturchef" of the Spiegel.


Mytwostotinki. Thanks for this information. I wish I there were such programs here in the Philippines. Thanks also for your kind words. It certainly was an alcohol fueled period!