The Hosts of German Literature Month

Works Read for G L V So Far
1.  Every Man Dies Alone by Hans Fallada. A brilliant recreation of life in Nazi Germany.
2.  Ostend, Stefan Zweig, Joseph Roth and the Summer Before the End by Volker Weidermann. A fascinating social history
3.  Buddenbrook Ths Decline of a Family by Thomas Mann.  Must reading
4.  "The Governess" by Stefan Zweig
5.  Demian:  The Story of Emil Sinclair's Youth by Herman Hesse.  Read the major works first.
6.  The Tanners by Robert Walser.
7.  The Hotel Years Wandering Between the Wars by Joseph Roth 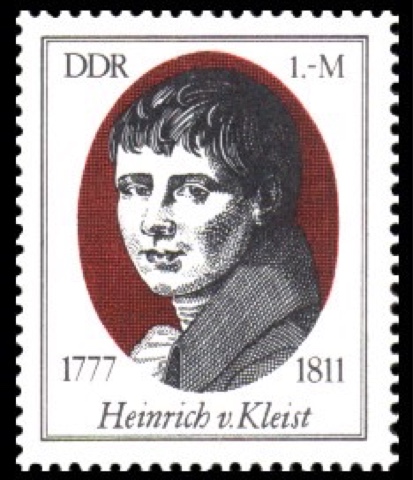 Last November during German literature month I posted on two short stories by one of Germany's greatest  writers, Heinrich Von Kleist, "Ths Begged Woman of Locarno" and "Saint Cecilia or the Power of Music".   Yesterday I read another of his delightful stories, "The Fugitive".  Set in 16th century Italy, it reminded me very much of some of the short fiction of Stendhal.

It is a tale of passion, mistaken identity and violent death set in an aristocratic family.  I don't want to spoil the story so I won't tell the much of plot.  The title character was adopted by a rich man as a replacement for his murdered son.   The man falls in love with a much younger woman and marries her.  The woman had been saved from death by a young man and fell in love with him.  He shortly died.  It all,gets very late Renissance drama now.

I enjoyed reading this story.  I have five more of his stories in a collection of his works I have and will hopefully get to them all soon.  I will save one for German Literature Month VI 2016.