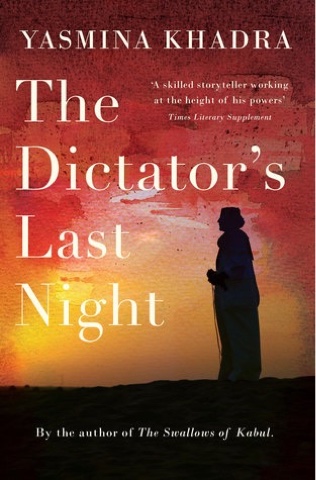 The Dictator's Last Night by Yasmina Khadra is an amazing, simultaneously terrifying and hilarious, developing a powerful depiction of the stream of consciousness of Muamar Gaddafi.  Gaddafi, born in 1942 and killed October 21, 2011, was the dictator of Libya from 1969 to 2011.  He emerges from the pages of The Dictator's Last Night, as an ego maniacal paranoid, addicted to heroin, a life long rapist, who kept his people and country in near slavery.  He was quite willing to see Lybya destroyed before he would give up power.  As his last night on earth begins,Lybya is being attacked by Western war planes while his personal enemies begin to see his end coming.  Gaddafi has retreated to his city of birth, thinking he will be protected by his tribesmen.  Everyone who comes into contact with him, being in fear of his capricious and murderous temperament, conducts themselves in a totally subservient fashion.  He is called "Guiding Brother".

Gaddafi never forgot anyone who angered or disrespected him.  There is a chilling account of how he took revenge on a woman, her husband and father, of a married woman who declined his sexual advances.  He trusts no one, not even his sons or his generals.  He does not seem to have a coherent ideology or a strong faith, he is driven by the pure lust for power, everyone is subhuman but him.

As I read on in The Last Night of the Dictator I was reminded of the work of Roberto Balano.

Much of the history of the world, and the 21th century is far from an exception, is driven by the fantasies and delusions of maniacs in positions of power.  There is a valuable lesson about the nature of power in The Last Night of the Dictator.  It is also a compelling narrative, very funny in places. I greatly enjoyed reading it and endorse it with out any reservations to all lovers of quality literature. 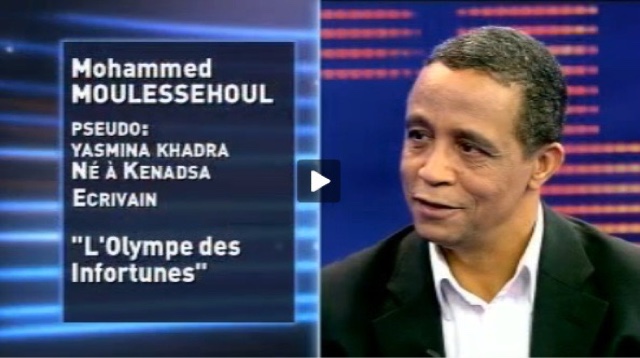 About this author
- From Goodreads
Yasmina Khadra (Arabic: ياسمينة خضراء, literally "green jasmine") is the pen name of the Algerian author Mohammed Moulessehoul.
Moulessehoul, an officer in the Algerian army, adopted a woman's pseudonym to avoid military censorship. Despite the publication of many successful novels in Algeria, Moulessehoul only revealed his true identity in 2001 after leaving the army and going into exile and seclusion in France. Anonymity was the only way for him to survive and avoid censorship during the Algerian Civil War.
In 2004, Newsweek acclaimed him as "one of the rare writers capable of giving a meaning to the violence in Algeria today."
His novel The Swallows of Kabul, set in Afghanistan under the Taliban, was shortlisted for the 2006 International IMPAC Dublin Literary Award. L'Attentat won the Prix des libraires in 2006, a prize chosen by about five thousand bookstores in France, Belgium, Switzerland, and Canada.

I first became familiar with the work of Gallic Books when I received a review copy of a wonderful biography they recently published, Helena Rubenstein The Woman Who Invented Beauty by Michelle Fitoussi.  I urge anyone into quality French literature in translation visit their very well done webpage.

Here is their mission statement

Gallic Books was founded by francophiles and former Random House colleagues Jane Aitken and Pilar Webb, with the aim of making the best French writing available to English-speaking readers. Having published its first titles in 2007, Gallic now has a catalogue of more than 50 works of fiction and non-fiction, including historical crime series, contemporary noir, commercial and literary fiction, recently adding classics to the list.

If the world of the reading life has a capital city it is Paris.  Ambrosia Boussweau