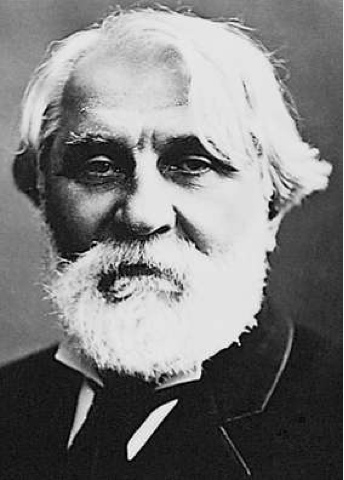 Frank O'Connor in his brilliantly and maddening book, The Lonely Voice:  A Study of the Short Story (as far as I know, the best and maybe only book worth owning on the short story) said that "Punin and Baburin" was the greatest of Ivan Turgenev (1813 to 1883- there is background information on him in my prior posts) short stories.  O'Connor flirts with the idea of saying it is the greatest of all short stories but he stops short of this. It is considered one of the most autobiographical of his works, drawing on his cruel mother and her abuse of the five thousand or so Russian peasants she owned.  She had absolute power over them and had severe punishments, including flogging to death, carried out when displeased.  Some credit Turgenev's stories as being instrumental in freeing the serfs.

We first meet the narrator of the story when old, looking back to when he was twelve, living on his grandmother's vast estate.   His grandmother has just had a serf who gave her a "sullen look" sold off to Siberia, close to a death sentence for most.  She asks one of her house servants if the man who has come to apply to be her new estate manager is here yet.  Quaking in terror the servant says yes.  The narrator is a lonely isolated boy inclined to poetry and Russian literature.   Compressing, if you are into short stories, you need to at some point read this, he becomes friends with the manager who in turn supports a friend.   Of course they run afoul of Grandmother when the companion speaks his mind about the brutal near slavery that most Russians were yoked with.  They are expelled.  We next pick up the narrator ten or so years later.  I really am not inclined to explicate the plot of this story any further.  We do come to meet the Punin and Baburin again several times over decades.  The ending is deeply sad.  One can feel the crushing weight of serfdom and the crushing of the psyche of the narrator, who by the end had inherited the estate, by his upbringing.   He is a man deeply divided and still unable to fully see the humanity in the "lower classes".

This Constance Garnett translation of this story is in the public domain and you can easily find it online.