Tania James. A Great Short Story by the author of Atlas of Unknowns 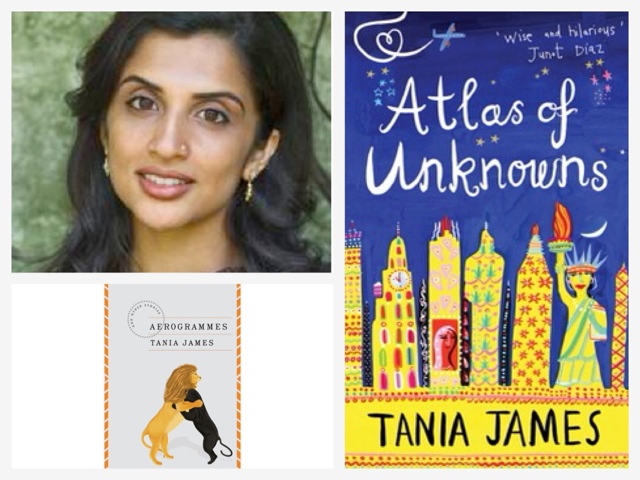 I first heard of Tania James when Amazon recommended her new and first collection of short stories, Aerogrammes, to me.  I know Amazon bashing is the trendy thing and I know they have negatively impacted lots of others in the book business. I look upon things from the point of view of a consumer of books, a reader.   As this, I think Amazon is a wonderful thing for the readers of the world, overall.  E reading has changed things  forever and I am glad.   I have been buying books from Amazon so long and browsed so much that I look at the works they recommend to me.  When I saw a glowing review by Karen Russell about the work of Tania James, I downloaded a sample copy and I looked online for her short stories.   I found two that could be read online for free. I liked them both a lot. There is some logic  in comparing her work to Jhumpa Lahiri, itself a great complement.  Both focus on people with ancestral roots in India now living in the United States and the conflicts brought about by having disparate cultures impacting a person.  I will just talk about one of them.

"The Other Gandhi" is a really well done story about the aspirations of a man, working in a camera store who sees himself as an actor and has had a few minor roles in the theater and some commercials but not enough to quit his day job.  He is offered a part as Gandhi, partially because he is Indian.   It is an odd sounding German low budget movie.  It is being made without him speaking, a German will do the voice.  He has a crush on an Indian woman working in the store.  She is very excited to hear of the movie and she invites him over to her place to watch the classic Attenborough movie on Gandhi.    She loans him books on Gandhi, fixes him vegetarian meals, and loans him books on Gandhi.  He begins to try to understand the teachings of Gandhi. When the film premiers imagine Royce's shock when he sees the opening credits:

"At the end, the screen faded to black over a violin solo of “Raghupathi Raghava Rajaram,” the bhajan that Gandhi and his followers sang on the Salt March. Tears rose to Royce’s eyes though he couldn’t exactly distinguish why; he tipped his head slightly to will the tears back into his sockets just as Laila slapped his knee. She was pointing at the screen, which read:
SHERMAN ORTIZ as Mohandas K. Gandhi
with additional scenes by ROYCE VARGHESE"
Royce is shocked to his core, he never knew there was a second actor playing Gandhi.  He is even more offended when he discover Sherman is Mexican.   The producers told him Ortiz has more the overall appearance and manner of Gandhi than he does.  Soon Ortiz is appearing at Indian cultural events all around the country.  To make it worse his crush plans to go hear Ortiz recite some of Gandhi's speeches.  His crush changes her shift at work to avoid him.  To make it all the worse, Ortiz is invited to India to recite.  Royce begins to think back on his high school drama teacher who praised him and he wonders will he ever be more than a camera salesman.  We see the woman lose interest in him and he decides to go to India himself.   I will leave the end of the story untold.
For sure I hope to read her collection and novel one day.

You can read ""The Other Gandhi" here
Official bio

Tania James was raised in Louisville, Kentucky after a brief stint in Chicago from ages 0 to 4. She graduated from Harvard University with a degree in filmmaking and received an MFA from Columbia’s School of the Arts.

Her debut novel Atlas of Unknowns was published by Knopf in 2009, and was a New York Times Editor’s Choice, an Indie Next Notable, a Barnes & Noble Discover Great New Writers selection, and a Best Book of 2009 for The San Francisco Chronicle and NPR. Atlas was also shortlisted for the DSC Prize for South Asian literature.

Her short story collection Aerogrammes will be released by Knopf on May 15, 2012. Her short stories have appeared in a number of journals including Boston Review, Granta, Guernica, Kenyon Review, One Story, Orion, and A Public Space. She has also written for The New York Times, The Courier Journal, and Elle India. The title story of her collection was a finalist for Best American Short Stories 2008 and a Pushcart Prize nominee.

Tania is the recipient of fellowships from the Ragdale Foundation and the DC Commission on the Arts and Humanities. From 2011-2012, she was a Fulbright fellow to India living in New Delhi. Now she lives in Washington