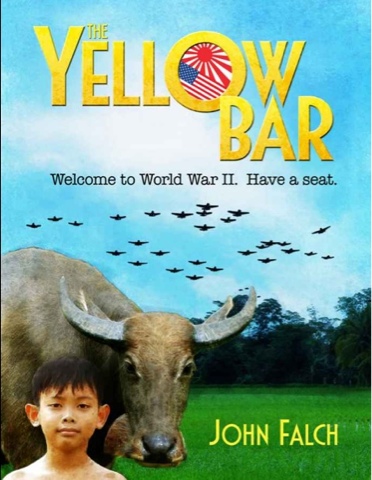 I have read and posted on a number of memoirs and works of fiction concerning World War II in the Philippines. One of my grandfathers by marriage was a guerrilla fighting the Japanese in northern Luzon.   There are not many people left living with memories of those years, 1941 to 1945.   Where we live now was once a center of terrible battling between the Americans and the Japanese determined to kill everyone living in Manila once they knew the Americans had them beaten.   The Japanese tried to convince the Filipinos that they were there to liberate them from the Americans but everyone quickly learned they would turn the country into a slave state.  John Falch in The Yellow Bar has written a work of fiction, based on well researched history, that lets us see what it was like to live through those dark years.

It is told partially through the voice of a boy ten when the war starts.  The central focus is on one fairly well of family whose house was taken over by the Japanese.  There is a father, mother, and several siblings and your sharp tongued Lola, grandmother in Tagalog.  There is also a servant woman and her daughter.   Filipino families are close, though hardly drama free, and Aunt Pinky, sister of the mother, plays an important part in the novel.   We also meet General Douglas MacArthur and his wife Jean.  (But we don't meet his Filipino mistress, whose first name was Pinky) MacArthur lived in The Manila Hotel penthouse, the poshest place in town.   The manager of the hotel, Eric, is a very heavy American (called a "Kano" in slang).     His lover is a Filipino attorney.  They are gay.  The narration refers to Eric as a "lavender".   He loves his job and is a great hotel manager.  He loves food, good wine, and being the head of a small empire.

There is a lot of exciting plot action in The Yellow Bar.  The account of the battle of Manila was just brilliant. Manila suffered more damage than Stalingrad, Berlin, or Shanghai. The Japanese went on a killing rampage that included infants and pets.  St Thomas University, the oldest college in the country-and where our middle daughter is a sophomore-was turned into a prison camp for three years to house foreign nationals.  (My daughter did not know this until I told her.). La Salle College, one of the countries most prestigious schools-and where our oldest daughter is a senior-was turned into a Japanese garrison.

A very exciting part of the story involves Pinky and her husband, Romeo, working as a singer and piano player at a very well known place that has a bad reputation as nightclub and dancehall  known for prostitutes.  It is also a high cost and prestige place for dining and shows.  Pinky never does anything wrong but her family does not like her working there.  Her mother had a screaming fit when she first found out about it.

Much of the action of the novel revolves around the struggles of the Reynaldo family to survive as servants to the Japanese that took over their house. They moved in next door in an old house they used to live in.   They worry when the Japanese leer at their early teenage years daughter.  They hate Japanese but some begin to seem a bit human.  Toward the end of the novel their house becomes a last night on earth residence for kamikaze pilots.  The quest for food begins more and more to dominate day to day life.   Everybody keeps saying MacArthur will keep his promise to return soon and I could feel the very real excitement when he did.  The Japanese navy, about 16,000 strong was given orders to die to the last man and to take all residents of Manila with them.   Terrible things happen to some of the people in this novel.  The characterization are really brilliant, without a false note.  The story is told through the eyes of a young boy so of course the Japanese are monsters (hard to deny this-one of the great shames of the Japanese is their refusal to pay compensation to comfort women, often very young girls forced into Japanese brothels and their denial that there was such things-most of those still living are in their 80s).  When the Americans come, they seem like heroes, saviors, and they are huge compared to the Japanese.

I loved how Falch ended the story, bringing the family and Eric together.  Eric during the years of the novel went from 280 pounds to not much more than 120 (but we know once he is back in California he will return to his old glory.).  Eric showed real courage as did many in the novel.

There is terrible violence and heartbreak in this novel.   I came to believe in and care about the members of the family and Eric.  General MacArthur comes of at best mixed.  It does seem he was ego-mad, selfish, and ran  the campaign to recapture Manila without much regard for civilian deaths.  It seems he strategically mishandled it but won because of massive American hardware and numeric superiority.  100,000 Filipinos died in the battle for the city, 16,000 Japanese (few surrendered) and 1000 Americans.   MacArthur is portrayed as upset mostly because he was deprived of a ceremonial victory march into the city like his rival Eisenhower had in Paris.

I liked this book a lot.  It can be read by young adults also.  I recommend it to anyone who appreciates a good well written story full of exciting plot turns and real people.  I totally endorse it for anyone who likes W W I I novels or is interested in Filipino history.  It is very well researched and based on my limited knowledge, the history is totally correct.
Mel u