The prayers of The Reading Life Family go out for the kidnapped Nigerian girls. 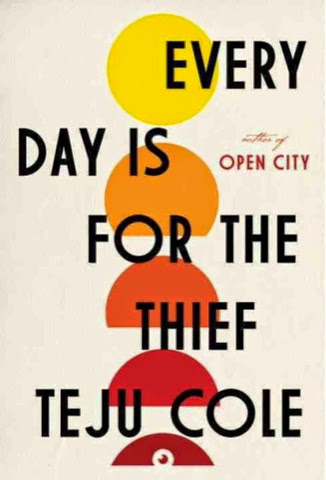 I came away from Every Day is for the Thief with two strong convictions.  The first is that Teju Cole is an extremely talented writer and the second is that I am very glad I don't live in Lagos, the capital of Nigeria and the setting for this powerful novel.  I live in a  tropical mega-city with its own well deserved reputation for corruption  but it is like Singapore compared to the urban environment depicted in Every Day is for the Thief.
The teller of the story left Nigerian for New York City fifteen years ago and is back for a visit.  Everywhere he goes he sees pervasive corruption.  In a place where few people, including police, customs officials and other government workers are paid a wage they can support their families upon, bribery and demands for tips are the only way to get by.  There is effectively no law, no one is in charge.  All of us have gotten E mails advising us that we have won something like the Nigerian National Lottery or have been given  $10,000,000.00 by the Nikon Foundation.  In a great chapter Cole takes us into one of the hundreds of Internet cafes in Lagos where these E Mails originate.  All ask you, if you respond, to send in an advance fee to collect your money.  This is illegal in Nigeria, the problem is if you are arrested, you just tip the policeman.  Those who do this are called Yahoo Yahoo boys as Yahoo chat is one of their big hunting grounds.  Many sit in the cafe for hours, the cost is seventy American cents and hour, less than two PHP.  They all dream of the mark who will send them a huge fee to exercise their option to buy an oil field in Nigeria for next to nothing.
The narrator  wanders all over the city.  His family in Lagos tells him don't take public transportation but he does it for the experience.  He looks up a boyhood friend now a doctor and a first girl friend.  He visits book stores.  We really feel we are the in Lagos and we begin to wonder what terrible thing can we next witness.
Cole has taken us deeply into a nightmare world. 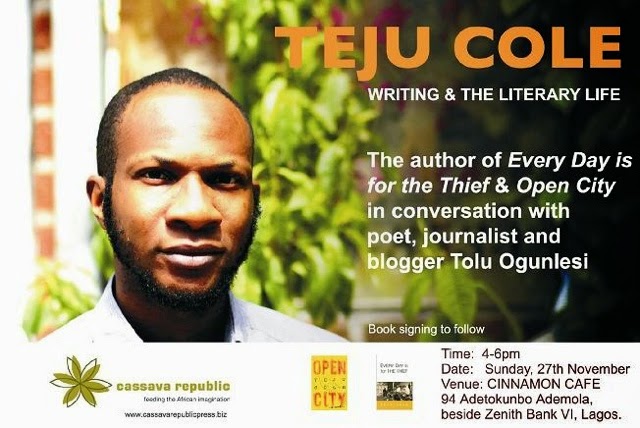 Official bio from webpage of author

TEJU COLE is a writer, art historian, and photographer. He is the Distinguished Writer in Residence at Bard College.

He was born in the US in 1975 to Nigerian parents, and raised in Nigeria. He currently lives in Brooklyn. He is the author of two books, a novella, Every Day is for the Thief, a New York Times Editors’ Pick, and a novel, Open City, which won the PEN/Hemingway Award, the New York City Book Award for Fiction, the Rosenthal Award of the American Academy of Arts and Letters, and the Internationaler Literaturpreis, and was shortlisted for the National Book Critics Circle Award, the New York Public Library Young Lions Award, and the Ondaatje Prize of the Royal Society of Literature.

Teju Cole is a contributor to the New York Times, the New Yorker, Qarrtsiluni, the Atlantic, Granta, Aperture, Transition, A Public Space, and several other magazines. He is a contributing editor at the New Inquiry, and is currently at work on a book-length non-fiction narrative of Lagos. His photography has been exhibited in India and the US, and has been published in a number of journals. He has lectured widely, from the Harvard Graduate School of Design to Twitter Headquarters, and he gave the 2014 Kenan Distinguished Lecture in Ethics at Duke University