The Hundred Days by Joseph Roth (1936, forthcoming in translation by Richard Panchyk, 2014) 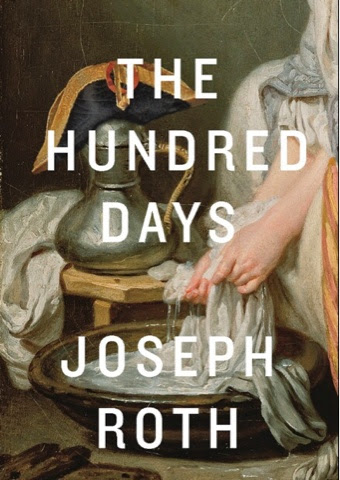 Josesph Roth (1894 to 1939, Austria, there is background information in my prior posts) is on my read everything I can by the author short list.  I started, as I recommend you do, with his acknowledged by all best work, Radetzky March and have so far also read and posted on his The Emperor's Tomb, Hotel Savoy, The Leviathan, The Legend of the Holy Drinker, and a collection of journalism, What I Saw:  Reports From Berlin.
The Hundred Days, elegantly translated and illuminatingly  introduced by Richard Panchyk, is a historical novel focusing on Napolean and on a humble laundress who is is among a staff of thirty that does the Emperor's laundry while worshipping him.  The novel is structured in a fascinating way that lets us see the era from the top and the bottom.  There are four sections, two center on Napolean and two on the laundress.  Roth manages brilliantly showing the profound impact of Napolean and the mutual love/hate relationship he had with the people of France and they with him.  The sections on Naploean focus on the hundred days (March 15 to July 8, 1815) of his return from exile in Elba to his final exile to Saint Helena. (In 1936 when the work was first published, it had to have had strong echoes to Hitler.)  We see the horribly destructive impact he had on France, the millions of senseless deaths he caused and we marvel at, and are mystified by a bit, the love of the common people of France for him.  Roth lets us see how many in higher levels of French society switched their alliances depending on how the winds of politics were blowing.
I found the sections that focus on the laundress, Angelina the most interesting.    Her aunt is head of the laundry staff and is known for seeing the future of Napoleon's battles in the cards.  The staff is in occasional close contact with Naploean and the women often seem to fantasize on sex with him, reported to be a rapid experience and there are many stories of his encounters in the rumor mills.  Some personal secrets hard to keep from the staff that cleans your dirty laundry and bathrooms.  We follow a long period in her life, from her involvement with a sergeant that leaves her pregnant with a son to his eventual enrollment in the French army.  She goes through some very hard times but never gives up on her love of Napolean.
Panchyk acknowledges The Hundred Days may not be on the level of Roth's  greatest works, little can reach this mark anyway.  To me the weak parts of this work are the relationships the laundress has with the men in her life and with her son whom she hardly knows.  Roth shows us the insane egoism of Napoleon, the wild fluctuations in his moods.  The core mystery of Napolean is the question of what gave him such magnetism, such power.  The Hundred Days can be seen as a savagely subtle attack on the "great man" model of history, on the leader as Father ideology that has come close to destroying Europe several times.

I am very glad I read this book and I am grateful for Panchyk's elegant translation.  He maintains a very interesting webpage.
http://www.panchyk.com/