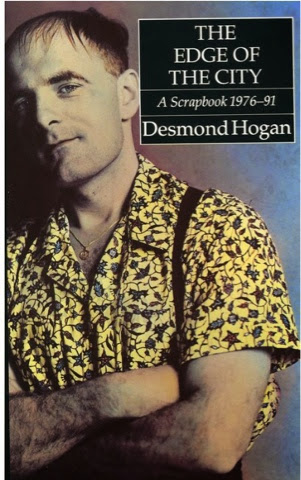 The literary world seems in two camps on Desmond Hogan, people who have never read or even heard of him and his readers who see him as an artist and a seer of first level  importance.   I have posted on around twenty of his amazing short stories and his classic first novel, The Ikon Maker.  In some of my posts I have tried to provide an account of what I see in his work, the nature of his artistry, his use of history, and his prose style.  Desmond Hogan gives voice to the marginalized, the lost both as individuals and as cultures. From him I have come to better understand, I hope, Irish history.  He is a very Irish writer and like many another you can feel the love and hate in his relationship to his birth country.  In the author's preface to Edge of The City A Scrapbook 1976 to 1991 Hogan says when he journeyed to San Francisco in 1976 he never really went back to Dublin.  I think you could also just as truly say he never left.
Edge of The City A Scrapbook 1976 to 1991 is a collection of articles Hogan wrote from  1976 to 1991 for various Irish and English magazines, journals, and newspapers.  Most of the articles are about places Hogan visited.  About five are about writers he admires.  Hogan is acutely observant.  I read with particular interest his long account of his time in Guatemala as I have been there also. The highlands are exquisite.  Gautemala has gone through terrible times horrible general poverty and bloody dictatorships.  Hogan senses well  pain.  He is an outsider and he sees the world through outside far from the center eyes. He knows Euro-Disney is not nirvana.  There are several very interesting articles on places in Ireland, on Russia, Yemen, Spain and Israel among others.  I really liked his articles on the USA locales of New Orleans and his journey down The Elvis Prseley Highway.  He sees the sharecropper's son where others see only Elvis, the King.
I read this book slowly, on and off for six months.  It helped me understand his short stories.
I greatly enjoyed and learned from Edge of The City A Scrapbook 1976 to 1991.
It is available on Amazon and from Lilliput Press.  Liiliput Press is Ireland's leading independent publisher.  Their webpage is a wonderful resource about Irish Literature and history.
I will be reading on in Hogan the rest of my life. I strongly urge flat a comprehensive complete edition of his short stories be published soon.
Mel u