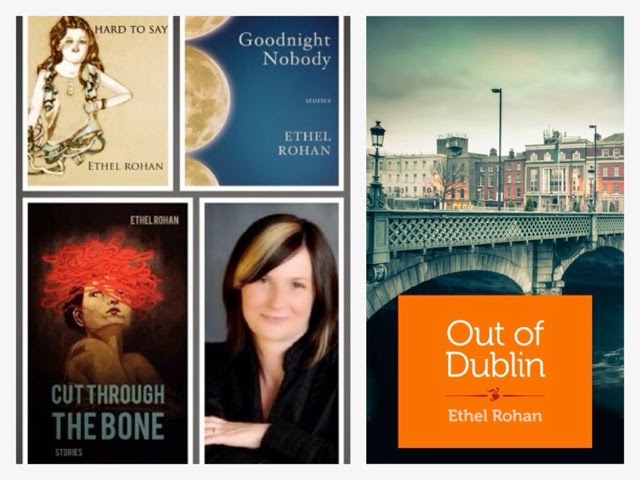 I have been avidly reading the work of Ethel Rohan ever since I first encountered her work during Irish Short Story Month in March 2012.  I have posted on numerous of her powerful deeply felt, very moving stories, done a Q and A with her, and she kindly wrote a guest post for my blog.  I greatly admire her work and talent and am convinced if someone does an Irish Short Story Month in twenty years her work will be among the by default must includes. Many things can happen in the career of a writer but I can easily see Ethel Rohan one day included among the great short story writers of the world.

Lately I have done some word count analyses of collections of short stories of Katherine Mansfield, Eudora Welty, Ernest Hemingway and other writers. (My study based on this was published in The Journal of The Katherine Mansfield Society, 2013.) In this I took key terms and compared them across writers to see if it reveals the core concerns of the writers.  The results startled me.  I did a similar study of the collections of short stories of Rohan (using the other writers I have studied as my comparative base) and her stories show way out of the norm use of the terms "Mother" and "Death".
Katherine Mansfield showed very much the same disparities.   I mostly read short stories as individual works but sometimes I wish to see into the deeper reaches of the psyche of an author.  I realize and respect those who follow the teachings of Roland Barthes and Susan Sontag and repudiate such things but they cannot prove their methods are superior to other ways and I think they know this.

Out of Dublin focuses on the relationship of Ethel Rohan and her parents, focusing on her return trips from San Francisco to Dublin when she was sent word by one of her sisters that their mother was dying. Rohan shares with us her feelings about her mother and the impact her mother's maternal failings had on her and her family.  She talks about her relationship with her father.   She is very open about the destructive impact of alcohol on her family.  To me I am so glad to have read this as it helps me better understand her work.  I greatly respect the honesty and courage manifested in this work.