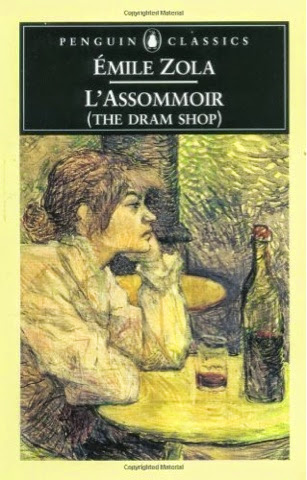 I want  to read all  twenty of the novels in Emile Zola's magnificent Rougon Macquart Cycle.  Inspired by Honore de Balzac's La Comedie Humaine, it is the grand flowering of European Naturalism.  Zola focuses on one extended family in the Second Empire, from 1852 to 1870.  Zola deeply researched everything he wrote about with an objective of showing life as it really was.   I have, including this work, read five of the novels in the cycle, The Belly of Paris (sometimes translated as The Fat and the Thin, set in the giant food market of Paris- food a very big element in Zola- he can make you feel stuffed and starving, Nana, a really great novel centering on a prostitute, in fact we see her childhood in The Dram Shop, The Ladies Paradise, set in a giant Paris department store, and his novel about the lives of coal miners, Germinal, considered by many his best work. This leaves 15 novels to go.  They are not overall as long as a Dickens or Tropllope novel so I hope to complete this project by July 2015, maybe much sooner.
The Dram Shop is a very powerful, almost brutal at times,depiction of the terrible impact of alcoholism on a family and the poor of Paris.  The story focuses on a woman we first meet when she is in her teens, with two illegitimate children.  She had the first child at 14.   She works in a huge laundry.  Zola does a wonderful job of letting us see, feel, and smell just what it was like to work there.  It was terribly hot and noisy, the washerwomen were all in each other's  business.  In a just a totally brilliant section the woman gets into a terrible fight! inside the laundry with another woman she thinks  is having an affair with her man.  The fight is incredibly vicious and lasts a long time. It was totally cinematic.
The woman is deserted by  the father of her children but soon ends up marrying another man.  His family looks down on her and does not want her in the family.  The wedding dinner was a lot of fun and a big group visit to the Louvre is hilarious.   All of the thirteen chapters have exciting incidents. At first things go well, in a few years the woman opens her own laundry shop and starts out doing well. The great feast in the laundry is just a tremendous pleasure to read.  It is a bit chaotic with her in laws there, her old rival now good friend, drinking companions of her husband, the women that work for her and some neighbors.  A lot happens in the novel, sometimes years go by between chapters.
There is constant spousal and child abuse, much as a direct result of drunkeness,  some of the saddest scenes I have read in a long time.  One man kills his wife by kicking her.  His eight year old daughter takes over as mother to her two younger siblings.  The man gets a horse whip just so he can beat her with it then blames the girl for requiring him to buy a whip and beats her for that.  The laundry has a mentally challenged woman working there and the owner slaps her for being slow.   Women commonly go to their spouses jobs on pay day to prevent it all being spent in a dram shop.
After a few good years, things go from worse to horrible for the woman.  She also becomes an alcoholic.  We see her daughter Nana drawn to the streets for excitement, money, and to get away.  At fifteen  she has begun to catch the attention of older men. Her father constantly abuses her and calls her a whore.   In one desperate scene, the woman, now in her forties and very heavy, walks the streets to sell herself but can find no takers.
There is a lot of drama in the novel.  I really enjoyed reading  it.  I read this in the Delphi Edition of The Complete Zola.  No translator credit is given and the dialogue is at times seems silly  with expressions like "Yikes, what a villain" to me in 2014 but no big deal.  The characters are very well realized.
All in all a very powerful work. 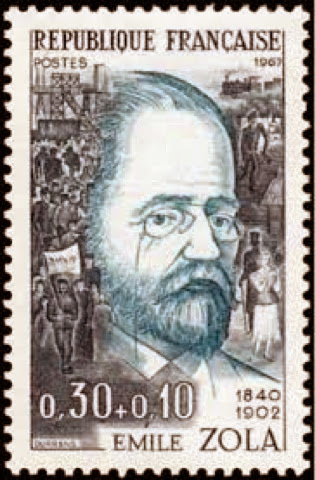 A hilarious group visit to the Louvre! This is going to be my next Zola.

I have not actually read any Zola novels about poor people, so I know I am missing a big part of what he does.