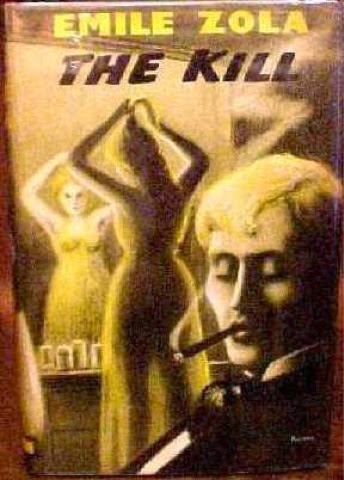 The Kill is the second novel in Emile Zola's Rougon Marquart Cycle.  There are three persons of import in The Kill, Aristide Rougon, son of Pierre and Felicite Rougon, his second wife Renne, and the son of his late first wife, Maxime.  The story is now set in Paris.  Pierre has become quite rich through speculating in property and financial instruments.  He always seems,or acts like he is, on the edge of financial ruin.
In France when an unmarried woman from the gentry got pregnant, there were two alternatives, send her away and figure out what to do with the baby or marry her fast to an acceptable man.   Pierre agrees to marry such a girl, being a widower.  She brings a handsome dowry and has her own property.   Renee is seven years older than her stepson Maxime. To the great relief of Pierre, Renee miscarried so he does not have the burden of a baby.  Much of The Kill, "the kill" is French slang of the time for the part of a hunted animal thrown to the dogs, is taken up in descriptions of conspicuous consumption and elaborate social events.  Maybe everybody in the cycle ends up as the kill.
Maxime and his stepmother Renee start an affair.  This is very interesting.  Maxime is portrayed as a foppish dandy, nearly adrogenous. Maxime is continually in financial trouble, indulged by Pierre who has his own affairs.   There are lots of complex financial transactions and double deals in The Kill.  It is quite erotic and pretty explicit for a novel of 1871.  Prostituion plays a big part in The Rougon Marquart Cycle.  The very few "good" people in this world seem to be sexual innocents.  Somehow sex equates to corruption, to the fall from Eden.
13 to go.
Mel u

This is a long series, but not as long as the Discworld series by Terry Pratchett that apparently never wants to end. Which is why I never started.