The Fortunes of The Rougons by Emile Zola (1871) 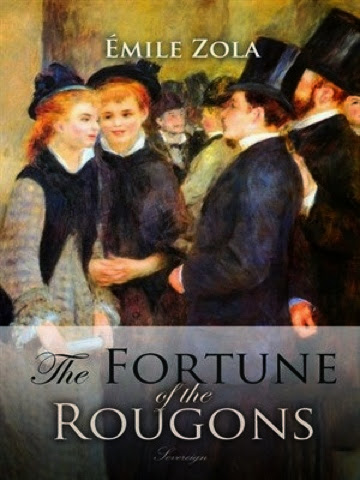 The Fortunes of the Rougons is the lead novel in Emile Zola's twenty novel Rougon Macquart Cycle.  With this novel I have now read six of the twenty.  I will, I hope, be reading the remaining fourteen in publication order.  None of the remaining novels are terribly long so I actually hope to complete this project fairly soon.  (You can find background information on Zola and the cycle in my prior posts on his work.).  The extended family can sort of be divided into three classes, the very poor as seen by the characters in The Dram Shop, the rich such as in novel two The Kill, and the bourgeois who appear in many of the novels.  Most of the lead characters spring from people we meet in The Fortunes of the Rougons.  For example Nana who we first met in The Dram Shop is the granddaughter of Macquart, a very disreputable man possibly involved in banditry. His behavior is way below the standards of decent folk.  From him descend many of the poor people in the cycle.  He was not married to the mother of the child, Madame Rougon.  From her legitimate children come the richer people in the cycle.  In a nature versus nurture breakdown, Zola puts a lot of weight on heredity.
You can see Zola is working hard to lay the ground work for the whole cycle in this novel.  The action of the novel centers on the impact of an insurrection in December 1851 that helped create the second Empire under Napolean III.  We see how the insurrection changed the fortunes of the members of the Rougon and Macquart families and Zola does a wonderful job of letting us see the terrible violence and atmosphere of fear the insurrection creates in a place where the memories of the Terror are very strong.  If you picked the right side and played your cards right, sucked up to those who will come out on top, your fortunes were made.  Be perceived to pick the wrong side, and you could end up shot.  The struggling middle class Rougons owe their rise (by novel two their children and grandchildren are hyper wealthy) to backing the right side.  The start of the family fortune comes when Mr. Rougon becomes tax receiver.
There is a lot of romance in the novel.  In 2014 we are not comfortable with great romances between preadolescent girls and considerable older men but I think this was not a source of great outrage in France in 1852.  Zola, like Balzac, is a novelist strongly  focused on money, and it is interesting to see how this impacts relationships in novel.   Zola worked hard laying the foundations of the cycle in this novel.   I think the more one reads on in the cycle, the more Zola's mastery will be evident.
Standing alone, The Fortunes of the Rougons is a good bit below Zola's most famous works but it is quite exciting and very much worth reading.
I have already begun novel two, The Kill, set among very rich Parisian descendants of the Rougons.
Please share your experience with Zola with us.
Mel u