"Sarrasine" by Honore de Balzac (1830, a short story component of The Comedie Humaine)

My Posts on Balzac
Recently I was reading an interesting review, by Nicholas Lezard, of  a new collection of some of Balzac's short stories. The review was published in the  very English Guardian.
(http://www.theguardian.com/books/2014/mar/25/human-comedy-balzac-review-nicholas-lezard)
Lezard makes the shocking to Anglophone readers assertion that "Balzac is simply a better novelist than Dickens". He also says, and I totally agree, that reading Balzac is like time traveling.   He mentions as one of Balzac's best short stories "Sarrasine", included in the anthology.  (I read it in an older translation by Clara Bell in the Delphi edition of the works of Balzac.).  It is part of Balzac's exploration of sexual themes, the blurring of male and female. 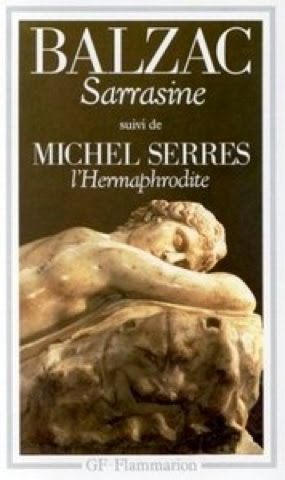 Based on my limited exploration of the vast world of Balzac he often uses the devise of one person telling the story of a third person to structure his works, especially in his short stories where he has less staging time.   They are also studies in how the telling of a tale can impact the teller and the hearer.  There is drama in these relationships, not just simple story telling.
"Sarrasine" is set an a social event of a very wealthy family.  The origins of their wealth are clouded in mystery but the narrator does tell us that enough money can make up for anything in a families past. The pretensions of society fall away before enough money.  The host family are impeccably dressed, their sixteen year old daughter is ravishing beautiful and a great matrimonial prize.  Their young son is incredibly handsome and the dream son in law for the wealthy guests.  Then a very strange quite old man dressed way out of touch appears at the party. A guest asks a man near him at the party about him.  Now begins a fascinating story that I will not spoil for you.
Proust's narrator often speaks of Balzac's exploration of sexual themes normally not spoken of openly.
There is much to ponder in this very interesting story.
It can be found online in older translations.
I am reading Balzac kind of at random.  I have not  made a mental commitment to read the full ninety plus works in The Human Comedy, yet.
Mel u

Lezzard is apparently crazy. And love, he repeats the basic Balzac error - "Over 90 volumes" - as if "Sarrasine" is a "volume."

I haven't read this one, but I should. It has a strange status now, because it serves as the base text in S/Z by Roland Barthes, a book of theory that I presume I would not understand. But it means that a legion of graduate students in literature have read exactly one work by Balzac, "Sarrasine."

Amateur Reader (Tom)- once I realized a lot of The Human Comedy consists of short stories and novellas then the prospect of reading it all does not seem so crazy Anybody who says it is ninety plus volumes has not really looked at it.