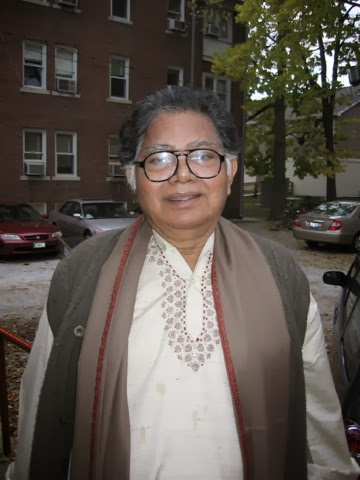 Sunil Gangopadhyay (1934 to 2012, Bangladesh) was a very prolific writer, in the Bengali language,
two hundred books.  He was a highly regarded poet, novelist and short story writer.  Two of his novels
were made into movies by Satyajil Ray.  He was a close friend of the American poet Alan Ginsburg.
(there is additional background information on him in my prior post on him)
"Virtue and Sin" is a story about the lives of ordinary people, a police officer, a well known thief and his
working as a prostitute daughter.  It is about the pervasive corruption of daily life and the way religious
taboos and customs in a very diversified society confuse things.  The police chief gets a tip that a
"most wanted" thief has been spotted at an inexpensive brothel.  The chief knows he will get big
kudos if he catches him and is very excited over the prospect.  He does wonder why the thief, quite
old, would be at such a brothel until he learns the Nan's daughter works there.  In one scene with
a great depth to it, the police officer knocks on the door of the daughter, she says sorry I have an
all night customer, come back tomorrow.  The officer goes in any way  and is shocked to see her fixing
her father dinner.  Events get complicated when they discover a statue of a God in the room. The
problem is that no body in the police officer's detachment is of the right caste to move it.  The statue
may be stolen.
"Virtue and Sin" is a well done story I greatly enjoyed reading.
Please share your experience with older Indian short stories with us.
Mel u