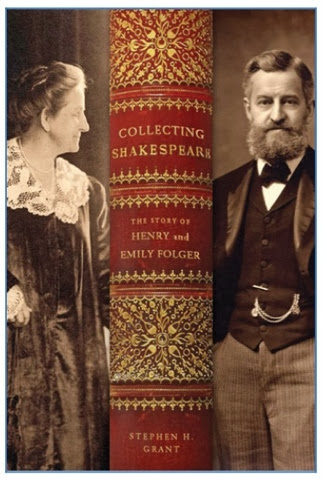 Stephen H. Grant in Collecting Shakespeare -  The Story of Henry and Emily Folger has done all lovers of the reading life and especially of Shakespeare a great service.  The theoretical theme of my blog is to explore literary and historic treatments of people who lead reading centered lives.  Grant's delightful book tells the story of Henry Folger (1857 to 1930) and his wife Emily Folger (1858 to 1936) and lets us see how their joint
love of Shakespeare, they met shortly after they graduated from Amherst and Vassar, led to a seemingly wonderful marriage and ultimately to the world's greatest collection of books, manuscripts, and treasures related to Shakespeare and his age.  (Here in Manila, my college student daughters have been assigned Folger Library Editions of his plays.)
The book is not just just about the marriage of the Folgers or their developing collection of Shakespeare.  It gives us an insight into college education of men and women in New England around 1879 or so. We can see their relationship begin, they never had any children, and how a mutual love of Shakespeare deepened their bond.  A love of reading and a love of books share common grounds and many love both but they are not at all the same thing.
Henry Folger worked for Standard Oil for forty years and was President of Standard Oil of New York for many years.  He used the fortune he made there to build up the collection.  Grant shows us how the rare book trade worked in the days of the Folgers.  In one very telling incident John D. Rockefeller heard that Folger had paid $100,000 for a book. He confronted Folger with this and he says he hopes word will not get out about this foolish purchase and Folger prevaricated and told him no it was only $10,000!  Now that book is worth millions of dollars.
Grant tells us how the world famous Folger Library came to be and how it has developed  over the years into the world's foremost library devoted to Shakespeare. It now has over 275,000 books and 60,000 manuscripts plus numerous other treasures.  Scholars come from all over the world to read there, many on fellowships.  It is located in Washington, D.C. and administered by Amherst College.
This book really is a very interesting fact rich work from which I learned a lot.  I think all public libraries should make this a priority purchase.
Collecting Shakespeare - The Story of Henry and Emily Folger  by Stephen H. Grant is the very epitome of a reading life book.