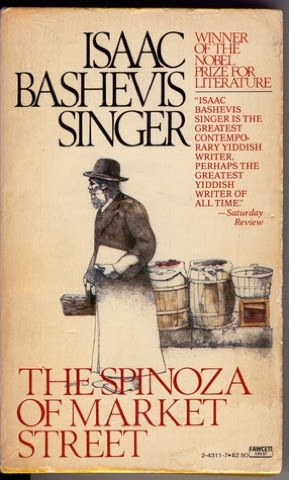 Isaac Singer won the Nobel Prize in 1978.  He was born in Poland in 1902, with his family due to the threat from the Growing power of the Nazis, he and his family immigrated to the United States in 1935.  He died in Florida in 1991.  He wrote largely in Yiddish.  I have previously posted on two of his short stories.  (You can find more information on him in these posts.)
Singer studied Spinoza in his youth, as did I.  "The Spinoza of Market Street" is a wonderful story of a man whose center in life is The Ethics of Spinoza.  For those who have not studied it, it is an intricate set of propositions and derivative theorems that are meant to explicate the meaning of the universe.  Scholars say it is derived partially from medieval Kabbalists and Platotists.  The Tractatus of Wittgenstein was influenced, at least in format by it.  The central character in this great story 30 years ago as a young student began to read The Ethics and never stopped.  He once had the intention of writing a commentary on Spinoza but now he just reads it over and over.  He carries it everywhere with him.
I do not want to tell too much of the marvelous plot of this story (I will provide a link to it at the close of the post.)  I really liked the close of this Warsaw story.
You can read this story here
http://fullreads.com/literature/the-spinoza-of-market-street/
My thanks to Billy O'Callaghan for bringing this story to my attention.
You can read his Q and A here.  Billy knows the short story format, both as an artist and a reader.
http://rereadinglives.blogspot.com/2013/03/billy-ocallaghan-q-and-session-with.html
Mel u