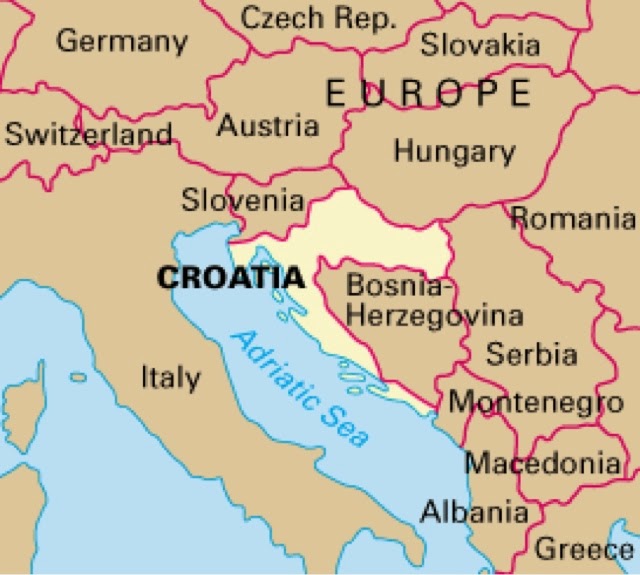 Project 196, my attempt to read and post on a short story from each of the 196 countries of the world, will run up until November 15, 2016.  So far I have covered 36 countries.  It may not be possible to complete this.  In covering South America, I was unable to find online in Englsh short stories by authors from Suriname and Paraquay. I will check periodically for newly published works and am open to referrals.   I have decided to do a tour of countries on the Adriatic Sea, inspired by Ruffington Bousweau's classic (1937) travel book, Adriatic Agonies.
Croatia has been a place of turmoil and sectarian violence for a long time.  Like the last story I posted on for Project 196, set in contemporary Montenegro, "Zlatka" is another story centering around a character's attempt to deal with the urban decay brought on by long years of unrest, poverty, and war. "Zlatka" is set in the capital of Croatia, Zagreb.  In a captivating very sensuous open sequence the female narrator is in a salon getting her hair washed  by Zlatka, a very attractive woman.  Later that night the narrator goes to a nightclub she often frequents. The walk to get their through a poetically rendered urban miasma of blight is really brilliant.  The nightclub is a place to get drunk amidst the techno-blast.  She by coincidence runs into the woman who earlier in the day did her hair.  They become lovers in an exquisitely rendered scene.  The presence of Zlatka's daughter is a marvelous touch that adds great poignancy and reality to the story.  There are great mysteries left untold in this marvelous story.
"Zlatka" is about escaping pain and loneliness in sensation, about growing up in an urban nightmare world.
I read this story in Best European Fiction 2012.

MAJA HRGOVIĆ was born in Split, Croatia, in 1980. She studied theatre and women's studies. Since 2003 she has worked as a journalist in the culture section of the Novi List Daily, and from 2005 to 2008 she was a member of the editorial board at Zarez, a Journal of Cultural and Social Affairs, where she publishes literary reviews.

In 2009 she was awarded first prize for journalistic excellence by the Balkan Investigative Reporting Network (BIRN). Her work has also been published in magazines and news portals such as Nulačetvorka,Cunterview, Kulturpunkt, Op.a, Grazia, andLibela. She regularly writes for the portalZamirzine, focusing on women's rights and their treatment in the media. Her first collection of short stories Pobjeđuje onaj kojem je manje stalo was published in 2010.

I have located one of her short stories online and will soon read it.