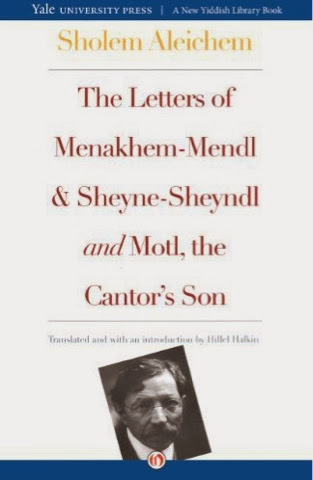 Sholem Aleichem (1859 to 1916, Ukraine) is, through his creation of the character Trevor the Dairyman on whom Fiddler's Roof is based, by far the best known of writes from the Yiddish literary tradition.  I loved his epistolary novel The Letters of Menakhem-Mendl and Sheyne-Sheyndl.  These letters between husband and wife are just flat out hilarious and provide a wonderful look at life in Eastern Europe and Yiddish culture.  Included with this work by Yale University Press is a first person account coming of age story of a young man, Motl, The Cantor's Son, the son of a recently deceased cantor (a singer of traditional songs) and his family.  It starts in the Ukraine and ends in New York City after the family passes through what the narrator keeps calling "Ella's Island".
Aleichem starts with a child's view of Yiddish life.  We see the families struggle to survive, their relationships with their neighbors, Jewish and Christian, the family relationships, the growing maturity of the narrator, and have a lot of fun along the way.  About half way through, the family begins preparations to go to the promised land, America.  We see their difficulties in securing tickets (there were also sorts of scammers ready to prey on those hopeful to move to America) and we are along on the ten day voyage to the holiest of cities where the streets are paved with gold, no one goes hungry, and there are no Cossacks or secret police.  Everyone knows of someone who went to America with nothing and now is rich.  The biggest fear the family has is that the mother will not pass the physical at Ellis Island.
Once in America, the younger family members soon master street English, play stick ball and are experts in dealing with the new challenges and opportunities New York City provides.  Aleichem lets us see the development of a hybrid argot combining  the slang of the tenements of New York City and Yiddish.  You can see the narrator is forgetting to a large extent his Yiddish heritage as he becomes more and more Americanized.
This book was a great pleasure to read.
I thank Yale University Press for a very generous gift of books.