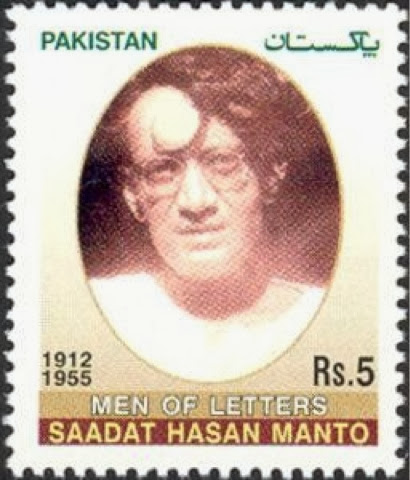 Saadat Hasan Manto's most famous works are his short stories about the senseless violence caused by the 1947 partition of Indian into two countries.  (There is background information on him in my prior posts om his work).  The stories show how people used religious differences as their excuse for horrible crimes against those of different religious faith.  I have recently begun to read short stories by Lamed Shaprio set in the time of vicious anti-Semetic pogroms in the Ukraine, circa 1915 and I find startling similarities among the stories of Shapiro and Lamed.  I am pretty sure Manto never read any of Shapiro's stories but I think they would have felt a kinship as men and as writers.
"Mozelle" deals with the relationship of a Jewish woman and a Shik man, in Bombay during the terrible post partition riots in which Hindu and Muslims turned on each other and both turned on Shiks.  Mozelle is a Jewish woman living in Bombay.  Her portrayal by Manto is a little troubling.  The Shik man wants to marry her, a shocking deviation from his cultural norms.   She is just having fun, she has many boyfriends and exhibits a promiscuity that would get a woman from Bombay labeled a whore.  Manto continually talks about her large breasts and white skin.  You have to wonder why is a Jewish woman treated like this,is there a suggestion of the corruption of the west, why is she Jewish and why the obsession with her large breasts.  Maybe Manto figures it will seem exciting to readers in 1951, maybe he likes large breasts, or maybe his editors said to punch up his work.  Anyway Shiks are hated by both Muslims and Hindus as they were very loyal to the British.  We learn a good bit about Shik culture, about the fact that men must not cut their hair or beards.  When Mozelle deserts him, he soon meets and falls in love with a demure very traditional Shik woman who wants to marry.  He learns rioters are going to her neighborhood and killing any Skihs they find.  I don't want to reveal more of the story other than to say Mozelle ends up naked in the rescue of the Shik woman.
This is a very interesting story.
I have access to more of Manto's stories and hope to read some additional stories by him this year.
Please share your experience with Manto with us.

This is an era of history that has fascinated me since I first saw the film Gandhi, so I'm glad to see it highlighted in your post, and to learn about an author who covers it thoroughly.