America Bewitched: The Story of Witchcraft After Salem by Owen Davies

America Bewitched:  The Story of Witchcraft After Salem by Owen Davies (to be published May 2013) 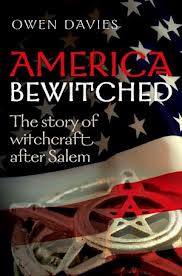 Since long after  the Salem witch trials in 1692 in Massachusetts witchcraft has played an important part in America culture.   Owen Davies, an authority on the history of the supernatural and witchcraft,  has written a very valuable book which covers everything from African-American folkways to the modern TV show Bewitched.  He shows us how old world beliefs about witches came to the new world along with European immigrants and African slaves.   He also talks about the witchcraft views of American Indians.  I was fascinated to see how these three cultures influenced each other in their witchcraft beliefs.

African slaves and American Indians both adopted their beliefs in reaction to the total domination of European culture.   To some extent they adopted the ways of the powerless in colonial situations world wide in which they held to views that they could make use of secret powers to damage the European settlers.  In the same frame, Europeans feared the Indians and the slaves would use witchcraft against them.

Davies details the very long persistence of witchcraft beliefs in America.   A  large number of people were murdered because they were thought to be witches that cursed people for revenge.  If your crops failed it was easy to accuse a strange seeming woman or man, especially one who did not speak your language, of witchcraft.   We learn that white missionaries looked at Indian medicine men as witches just as many Indian tribes demonized the white man after their initial contact.

One of the, to me, most interesting parts of the book was in Davies' explanation as to why European fairies and little people did not also appear in American folk beliefs to the very large extent they do in the cultures the immigrants came from.   I have been reading  lately in the folkways of western Ireland and very few of the vast legion of fairies and their cousins moved with the Irish to the new world.  Davies explains, which rang totally true to me when I read it, that fairies are rooted in the place they are from, with roots too deep to move.   Fairies in Ireland were rooted in local geographies and ancient interpretation of the landscapes of Ireland.   Likewise trolls and such from the Black Forest in Germany were not equipped for the long sea voyage. Much of Irish fairy legends was centered on prehistoric mounds and stone works. .  Witches were people so they easily made the transition.

Davies shows us that much of what people saw as witchcraft were just applications of folk remedies from traditions they did not understand.   Germans saw Spanish folkways as witchcraft, especially when they were mingled with Indian tradition but they saw their own just as normal activity and vice-versa of course.

Davies also talked about the reaction of the Indians to European technology which they recasted into a supernatural ideology meant to fight the diseases and the overwhelming power of the colonizers.

Davies deals in a debunking fashion  with the popular notion, put forth by contemporary American Wiccans, that American witches were persecuted for following the practices of European pagan cults.   Davies explains to us that in America in  the 16th century up to the middle of the 19th a witch was a "malicious, destructive individual bent on destroying individuals and communities."   There were never any circles of "good witches or followers of Celtic traditions.   This is a creation of the 20th century.

The basic theme of Davies' very interesting and well documented book is that America is a country to which magical traditions were transported and then reshaped, from Europe and Africa.  Indian folk beliefs were preserved through some incorporation into the folkways of Europeans but there were largely lost due to the total destruction of indigenousness cultures.

Just as it is the case in all cultures, believe in witchcraft was strongest among the marginalized in society.  People still demonize those who are not like them, those who do not share their core beliefs or just those who seem "different" to them.

I learned a lot from Davies' great book.    An understanding of witchcraft views is important to understanding  classic 19th century American novels like Huckleberry Finn and The Scarlet Letter.    This book should be read by anyone into occult studies, American history and colonial patterns but it also can help us understand modern America and the divisions that still plague it.

In the interests of full disclosure I was provided a prepublication copy of this work by Oxford University Press.

Thank you very much for this, Mel! I've been looking for such a book for a long time. Just yesterday, I was debating whether or not to purchase Marina Warner's Stranger Magic, which contains essays on basically the same themes as Davies covers in his book. But I'm guessing that Davies' work is more comprehensive. I'm practically fascinated with the supernatural and magic because of the Filipino culture. Growing up, I was told not to do this or that because the demons might come after me or the witches will cast a spell on me and such things to frighten an easily frightened kid. In high school, I also did a class report on the Salem witch trials while my classmates stick to the beautiful fairies. Was I crazy or what? Anyway, I'm definitely going to read this. :)

I can't but ask if Davies brings his subject up to our times. I grew up in a slightly fundamentalist family that really believed in the existence of witchcraft in just those terms. And I can't help but ask about the infamous Youtube video showing then Governor Palin praying to drive witches away from the U.S.

In any case, America does have an interesting history of 'witchcraft.'

Nancy. Try the suggestion I emailed you

C. B James. He talks about tv shows like bewitched and he focuses more on movies on witchcraft than the views of what must be millions of people who share the attitudes of People like Sarah palin on witches in contemporary America. There is a very ugly side to American fundamentalism, and a demonizing of people who do not share your beliefs is part of that