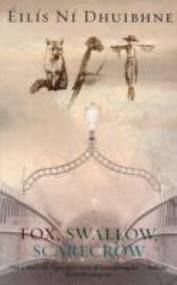 "The problem with Alex, she reasoned, was that he was just too masculine.  Masculine men could not understand any point of view except their own.  Single-minded, they had developed blinkered vision millions of years ago to sharpen their hunting skills".

Anna Sweeny is working on a novel.   Her husband is riding the back of the Celtic Tiger and much of her time is taken up with literary parties.  I have been partially focusing on Irish literature for about a year and a half now so I had fun trying to figure out who the fictional authors in the novel are supposed to be in real life. I knew one was Sebastian Barry whose Secret Scriptures I recently read.   I know there were a lot of references I did not get.   I really liked this aspect of the novel a lot.   I felt like I was there for the launch parties and I felt what it was like to be a literary agent or a poet in Ireland.  Everyone in the literary world depicted in this novel is trying to ever so subtlety put down everyone else.   There are a few super stars and everyone else is trying not to be jealous and of course no literary artist would want anything as pedestrian as to be the next J. K. Rowling (who appears at a book launching).

There are characters that will remind you at once of the main persons in Anna Karenina and we get to see how they live. In a touch so heavy handed it is hilarious, one of the characters is named "Leo" and there is even a homeless tramp who reads Tolstoy.   If you have read the novel I know you gasped when you saw what you at first thought the tramp did with War and Peace.   Leo works on programs to reduce the deaths by auto accident in Ireland.  He does something just flat out crazy on a train one day and it comes back to haunt him.   I really liked that segment of the novel.

There is a lot to be learned about Ireland in this novel.   We see the different neighborhoods of Dublin, we ride on the trains and buses, we take the expressways,  we see the many subtle class distinctions at work.  There are also lots of wonderful literary references in the novel, besides those to Tolstoy.   There are lots of references to Irish folklore also.

On every page there are amazing beautifully written sentences.   This is an amazing novel and I feel bad as I know I cannot do justice to it.

I loved this book.

I have previously posted on her brilliant short story "Trespass"

Éilís Ní Dhuibhne (1954, Dublin) is the author of eight novels, four in English and four in Irish.    She has a PdD from The National University of Ireland, focusing on the work of Chaucer as part of an oral tradition.    She has taught at the University College Dublin and was for many years a curator at The National library in Dublin.   She also teaches creative writing.   Her novel, The Dancers Dancing, was short listed for the 2000 Orange Prize.      She is very dedicated to preserving and promoting the Irish literary tradition.

I hope to very soon read her The Dancers Dancing and some more of her short stories.