Cal by Bernard Maclaverty (Belfast, Ireland, 1942) is a wonderful novel set in Northern Ireland during a period of terrible conflicts between Catholics and Protestants.  As I have said before it hard for an outsider to Ireland to understand the extreme hatred between  many Catholics and Protestants unless you know some of the history of the country but once you do much becomes clear.   It is pretty impossible not to blame the English for much of the problems in Irish history.  Way oversimplifying, Protestants were considered sympathetic to English Rule of Ireland (often using the famous slogan "Home rule is Rome Rule" to justify their opposition to independence) and were seen as the oppressors of the Catholic majority.

Cal is the story of a young man from a working class Protestant family in Belfast.  Catholics and Protestants do not normally mix socially.  People say things like, "He seems nice for a Catholic" and "you would not know him to look at him but he is a Protestant" when they want to be pleasant.    His mother died a few years ago and he lives with his heavy drinking father who works in a slaughter house.   The slaughter house struck me as a symbol for the fates of people caught in the conflicts in Northern Ireland.   Cal worked for a short time in the slaughter house, his father called in some favors to get him a job in a time when jobs are hard to find.  Cal quit the job after a few days because he hated it. 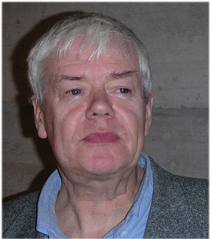 We see Cal's troubles with local toughs and we fear for him.   MacLaverty does a good job bringing the mean streets of Belfast to life for us.   There is a romance in the story between Cal and a female librarian a few years older than himself.   She is a widow, a Catholic, whose husband was killed by the factions opposed by Cal's people.

MacLaverty does a good job of depicting the sexual reticence of Cal and the librarian. It also shows the pervasive guilt that bind families.     Stories about cross faction lovers can seem cliched and I did not find this part of the story real convincing.   Like so many Irish works, alcohol plays a big part in the story.

I am glad I read this book.  It is a quick read and it is short.  I will more of his work in the future.

I have previously posted on his very good short story "Life Drawing" and there is some background information on him in that post.