The Picture of Dorian Gray by Oscar Wilde

The Picture of Dorian Gray by Oscar Wilde (1891) 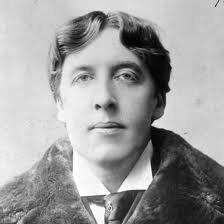 
Wilde himself is a transitional figure. The man who, when he first came to London, sported a velvet beret, lace shirts, velveteen knee-breeches and black silk stockings, could never depart too far in his life from the pleasures of the old-style dandy; this conservatism is reflected in The Picture of Dorian Gray. But many of his attitudes suggest something more modern. It was Wilde who formulated an important element of the Camp sensibility -- the equivalence of all objects -- when he announced his intention of "living up" to his blue-and-white china, or declared that a doorknob could be as admirable as a painting. When he proclaimed the importance of the necktie, the boutonniere, the chair, Wilde was anticipating the democratic esprit of Camp.-from Susan Sontag's "Notes on Camp"

The first time I read The Picture of Dorian Gray by Oscar Wilde I was probably fifteen or so.   I think that is probably about the right age to first read it.   I remember thinking at the time how wonderful it would be to know people who actually spoke the way the Lord Henry and Dorian spoke about art, life and beauty.  The Picture of Dorian Gray helped to create or make public a new sensibility, that of camp.   It also was one of the first, that I know of, novels to openly glorify a thinly disguised homoerotic fixation.  I think it was in a way a great force for social good in the world as it was a model for future GLBT writers but in a way I think it may have done harm as it lead to the identification of gay men as "fops" given to long anti-adult commentaries on the nature of art and such.

The best thing in the novel is in the outrageous things Lord Henry says and the worse thing in the novel is the fact that there is no counterpoint to the things he says.   Have you ever had a reunion with a friend from decades ago, one you were once very close to and had memories of great conversations with and then upon seeing them again found you or they had changed enough so you did not have as much to say to each other as you once did and you were a bit glad when you parted, still on good terms and promising to stay in touch but knowing you probably will not?

I think everyone should read The Picture of Dorian Gray.  It is not that long, it is an important work historically and you might be entranced by some of the things said in the conversations.  It will probably make you think.   It did change the world.  I also have posted on some of his plays and short stories and highly recommend them.

Mel, I have been planning to read this book for years but just haven't got round to it. I have a free ebook version that I intend to read soon. The "reunion with a friend" poser sounds all too familiar.

I read "Dorian Gray" when I was an eighth grader and was completely absorbed by the plot. When I reread it much later, I enjoyed the themes particularly of Wilde's criticism of beauty which enriched my reading experience.

Excellent review! I read this many years ago. It's a classic novella, not to be missed!

Like you I read this when I was younger & enjoyed its tale.