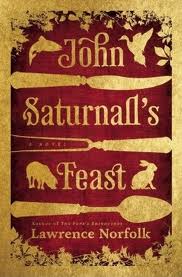 
John Saturnall's Feast is  Lawrence Norfolk's (1963, UK) newest historical novel.  A. S. Byatt has said he is "the best of the young novelists writing today".   He has three earlier novels, all got great reviews and sound really interesting.   Based on this work, I hope to read through his works in publication order.

This novel is the story of a young boy, whose mother was considered a witch and whose father was never known, who went from being a kitchen boy in a great house in seventeenth century England to being regarded as the greatest cook in England, selected to cook for the king.  The novel does a wonderful job of taking us inside the kitchen.   Everybody had their roles and the kitchen masters ruled with an iron hand.   We experience the kitchen from the point of view of a young boy who sees finding a place there as his way to stay alive on up to his days as a great cook.      We follow his career as he rises up.

Perhaps the most interesting thing about this novel was the lush and highly detailed descriptions of the cooking procedures and the luscious food.   No concerns about cholesterol here.

The novel is set in the times of the English Civil War (it covers a lot of years).   There is also a romance between John and a noble daughter of the house which, as you could guess, is a rocky one.   She is being forced into a marriage with a man who hates her as a condition for receiving a large bequest.

There are big moments, when the king is there for a feast, when Cromwell's men take over the castle and when we end up seeing them hung when Cromwell is defeated.   We go into battle with the cooks from the big house.  I laughed when one of them told the others not to worry we always get put in the back lines as who will feed them if something happens to us.

I really enjoyed reading this book.   I thought the only weak spot was in the romance between the cook, John and the young noblewoman.

I will, I hope, soon read his first novel, The Pope's Rhinoceros, set in the 16th century.  It sounds fascinating.

I recommend John Saturnall's Feast to anyone who likes a very well written literary historical novel set in England in the 17th century.

Please share your experience with Lawrence Norfolk with us.   Besides Hilary Mantell, what historical novelists do you like?

The best historical novel I've read recently is Rose Tremain's Music and Silence - it's set in the 17th century - a young English musician goes to the Danish court and becomes caught up in the intrigue between the King and his unfaithful wife. And then I loved Michelle Lovric's novel 'The Book of Human Skin' which is set in 17th century Venice.
But I'm also enjoying some of the Peirene Press translations of European literature, particularly The Brothers by Asko Sahlberg which is set in 18th century Finland.