The Secret Scripture by Sebastian Barry 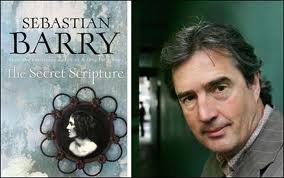 "For my mother never made miniature legends of her life, and was singularly without stories, though I am sure there were things there to tell as good as my father's"

Sebastian Barry is one of Ireland's most distinguished contemporary writers.    He has  been short listed for the Man Book Prize.  His novels are set in County Sligo.  The Secret Scripture was my first work by Barry and it certainly will not be my last.

The novel tells the story of a 100 year old woman who has been confined for decades in a Sligo mental hospital.   In her youth she was considered the most beautiful woman in Sligo.   As I read this story I was glad I knew that women were, at one time in Ireland,  sometimes placed in mental hospitals for adultery or because they were considered promiscuous.  Men were not so treated.  She lived through a very turbulent period in Irish history.

There are two narrators in this work, their stories were in counterpoint to each other.  One of the narrators is the woman and the other is the doctor who is director of the mental hospital.    She was a patient there when he started working there long ago.    There is a lot to be learned about the sexual morals of Ireland in the period from this novel.    The doctor is faced with a big problem.    The state run mental hospital is closing down and he has to decide which of the patients are mentally fit to be returned to the community.  One of his biggest concerns is what to do with the 100 year old woman who has been in the mental hospital for sixty years.  He begins to have long  conversations with Roseanne McNulty and he sees she is very intelligent, well read and he can find no reason she should ever have been in the mental hospital in the first place.   Gradually through the two narratives we learn the life history of the patient and it is a heart breaking one.  As we read the diary of the patient we learn of a father who died very young and a mother who withdrew into herself after his death.   Declan Kiberd has stated that the central theme of Irish fiction is the weak or missing father and The Secret Scripture by Sebastian Barry deals brilliantly with this theme.

There is much, for me anyway, to be learned from this novel about life in Ireland.   It is hard for an outsider to understand the tremendous hate that Irish Catholics and Protestants have for each other.

The Secret Scripture is brilliantly written, some of the passages were simply amazing in their depth and beauty.   I recommend this novel without reservation.

Sebastian Barry was born in Dublin in 1955. His plays include Boss Grady's Boys (1988), The Steward of Christendom (1995), Our Lady of Sligo (1998), The Pride of Parnell Street (2007),Tales of Ballycumber (2009) and Andersen's English (2010). His novels include The Whereabouts of Eneas McNulty (1998), Annie Dunne (2002), A Long Long Way (2005) and The Secret Scripture (2008) and On Canaan's Side(2011).
He has won, among other awards, the Irish-America Fund Literary Award, the Christopher Ewart-Biggs Prize, the London Critics' Circle Award and the Kerry Group Irish Fiction Prize. A Long Long Way, which was also shortlisted for the Man Booker Prize and the Dublin International Impac Prize, was the Dublin: One City One Book choice for 2007. The Secret Scripture won the Costa Book of the Year Award, the Irish Book Awards Best Novel, the Independent Booksellers Prize and the James Tait Black Memorial Prize. It was shortlisted for the Man Booker Prize, the Kerry Group Irish Fiction Award and the Christopher Ewart-Biggs Award.
Sebastian Barry lives in Wicklow with his wife and three children.
Please share your experience with Barry with us.
I am asking for suggestions for 21st century novels by Irish authors, set in Ireland and available as eBooks

A beautiful book. Good to see it featured here. Patrick Mc Cabe's 'The Butcher Boy' is on Kindle. Another brilliant Irish writer